Catholics spreading "prayer books of a revolutionary" on Maidan 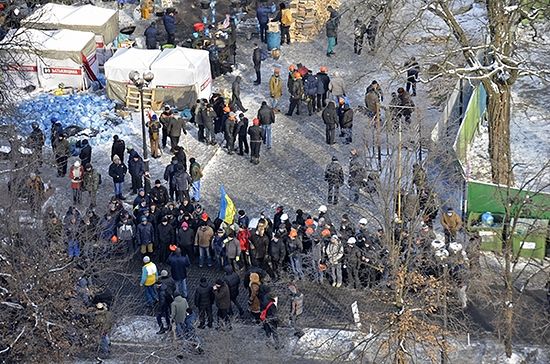 Catholics are stoking the passions on the Maidan in Kiev, states the head of press service of the Ukrainian Orthodox Church Vasily Anisimov, reports Interfax-Religion.

Maidan is being spiritually guided by Uniates, schismatics, and sectarians, according to Vasily Anisimov.

"The degree of their leaders’ hatred of often goes beyond limits. Even Vladimir Putin in Brussels cited one Uniate priest. And Catholics are distributing a “prayer book of a revolutionary" to the Maidan protesters, said V. Anisimov in his interview with the Radonezh website.

According to him, they are distributing five recommended prayer steps with extensive explanations.

The first step is "to rely entirely upon God, asking Him to interfere in the history of our nation".

"It reads that it was impossible to overthrow the Philippine dictator Ferdinand Marcos; only one battalion took the side of rebels. But a local cardinal called upon his flock, and millions went out to the streets, blocked the army and overthrew the dictator. The text of a Philippine prayer of 1986 is cited, "adapted to our situation," explained head of the press service.

The second step says that "every tyrant is a sin of the people", and sins of the people from abortions to corruption are enumerated in the prayer. The third step, "to forgive one's enemies", indicates that "forgiveness does not mean refusal to struggle".

V. Anisimov has reported that the Ukrainian Orthodox Church made an inquiry to the nuncio on this issue, and is waiting for a response.

"The original text of this ‘prayer book of a revolutionary’ was written in Russian and then translated into Ukrainian, as the text contains many russianisms and loan translations (calques) from Russian. It was compiled long ago, because it gives information on abortions that is already six years old. It is probably a universal ideological text, which Catholics adapt to specific countries, where there is a need to overthrow ‘tyrants’,” he added.

According to the Russian leader, some priests in the western Ukraine are calling upon their flock to take part in protest actions in Kiev, speaking against representatives of national minorities.

At the press conference in Brussels after the summit, "Russia—the European Union", answering a question on the situation in the Ukraine, the president of the Russian Federation Vladimir Putin declared a threat of nationalism in the Ukraine. Rossiyskaya Gazeta has learned which priest the head of the Russian state was talking about. It was a priest of the Ukrainian Greek Catholic Church, Michael Arsenich, better known among his flock under the nickname "Palka" ("stick"). A reel with a sermon of this rector of the church in the Novy Berezov village in the Ivano-Frankiv region became extremely popular among militants early in December 2013.