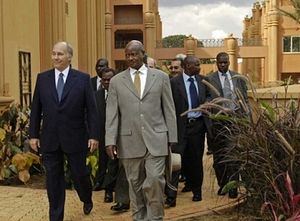 Washington has confirmed that the US is cutting aid to Uganda in light of severe anti-gay laws that punish those who engage in homosexual activities.

"We announced in April a series of initial responses, and we have since considered how further to reinforce our support for human rights of all Ugandans, regardless of sexual orientation or gender identity."

The statement outlines "several additional steps" taken by the US government to meet this aim, including the imposition of visa restrictions on Ugandans thought to be involved in human rights violations and "discontinuing or redirecting funds for certain additional programs involving the Ugandan Police Force, Ministry of Health, and National Public Health Institute".

Uganda passed a law in February that makes homosexual "touching" punishable by life imprisonment, while promoting homosexuality or in any way aiding others who wish to commit same-sex acts could result in a prison sentence of up to seven years.

President Yoweri Museveni signed the bill, despite earlier promising that he would not do so without "confirmation from scientists" that homosexuality is "not genetic, but a behaviour that is acquired".

Archbishop of York John Sentamu condemned this decision, declaring that: "No-one should have to live under the threat of violence and death, or live in fear because of the bigotry of others.

"Every person has the right to enjoy safety and security regardless of their beliefs or sexual orientation – we are all created in God's image and likeness," he said.

"We are all created by the God of love, and are of infinite worth in his sight."

Former Archbishop Desmond Tutu also denounced Museveni's law, comparing anti-gay legislation to Nazism. "There is no scientific justification for prejudice and discrimination, ever. And nor is there any moral justification. Nazi Germany and apartheid South Africa, among others, attest to these facts," he stated.

A spokesperson for the Department for International Development in the UK earlier assured that Britain will not be cutting its aid programmes, noting that it "remains committed to supporting the people of Uganda," but President Obama took a stronger stance - warning Museveni that the anti-gay law would "complicate" relations between the two countries.

Washington has already redirected or stopped millions of dollars in aid to Uganda, and will now do so with further funds. However, the administration has insisted that it will not withdraw all its support in Uganda.

"None of these steps diminishes our commitment to providing development and humanitarian support for the Ugandan people, or our partnership with the Ugandan government to counter the murderous Lord's Resistance Army and improve security in Africa," Hayden said.

"We will seek to advance these interests even as we continue - in Uganda and around the world - to oppose discriminatory practices and champion human rights for all."

Reuters news agency notes that Uganda is "a key Western ally in the fight against Islamic extremism in Somalia", as Ugandan troops are a large force in the African Union which is working to eliminate militant groups associated with al-Qaeda.

It also quotes a Ugandan official in Kampala as asserting that the nation will not be "blackmailed" into changing its laws to appease Western governments.

"Uganda is a sovereign country and can never bow to anybody or be blackmailed by anybody on a decision it took in its interests, even if it involves threats to cut off all financial assistance," Ofwono Opondo, a government spokesperson, said. A Greek Priest in Uganda

A Greek Priest in Uganda
Yet, in this forgotten place of Africa, a man has dedicated his life to create a better future for hundreds of poor children. Father Antonios Mutyaba, together with his wife Charitini, and with the support of the Greek Orthodox Diocese of Kampala, is working hard to provide a chance in life for the children in Luweero.
×