Indulgences in the history of the Greek Church 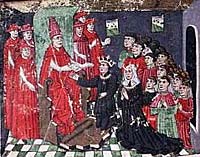 In the 16th—18th centuries the Greek Church, even though limited in its contacts with the outer world to the borders of the Ottoman Empire, came under a great influence of Western Christianity—greater than did the Russian Church. Here Catholic propaganda worked more effectively, especially with the foundation in 1622 of the Sacred Congregation of the Propaganda of the Faith, for both Greek scholars and theologians had increasing contacts with the West and most of them studied there. These and other factors led to the Greek Church in great part undergoing a Western metamorphosis, according to the expression of Father George Florowsky.

One of the manifestations of such a metamorphosis was the introduction of the sale of Christian indulgences into the practice of the Greek Church.[1]. These were real indulgences: certificates which absolved from sins, which anyone could obtain, often for a specified sum of money. The absolution granted by these papers, according to Christos Yannaras, had no connection with any participation of the faithful in the Mystery of Penance, nor in the Mystery of the Eucharist.[2]

It’s hard to determine when indulgences began to be used among Greeks living under the Turkish yoke. They were widespread enough in the 16th-century. At the beginning of the 18th century, the Patriarch of Jerusalem, Dositheus Notaras, writes of indulgences as of a well-known and ancient tradition. “We have the custom and ancient tradition, which is known to all, that the most holy Patriarchs would give the people of the Church a certificate for the absolution of their sins.(Sinhorohartion)”.[3]

The practice of issuing indulgences, having existed at first unofficially, got its official confirmation at the Constantinople Council of 1727. That Council was called in response to increasing Latin propaganda, spreading mainly in Syria, Mesopotamia, Palestine, and Egypt, and it was also the continuation of the Constantinople Council of 1722.[4] That Council published "The Confession of Faith"[5], the text of which was compiled by the Patriarch of Jerusalem Chrysanthus (+ 1731), and was signed by these patriarchs: Paisius II of Constantinople, Sylvester of Antioch, and Chrysanthus of Jerusalem, as well as hierarchs located at that time in Constantinople and participating in the Council

Thus, in the 13th clause of the document it is said: "The power of the forgiveness of sins, which is termed by the Eastern Church of Christ “Absolution Certificates” when given in writing, but by the Latins “Indulgences,” is given to the Holy Church by Christ. These Absolution Certificates are issued in the whole Catholic Church by the Four most holy Patriarchs: Constantinople, Alexandria, Antioch, and Jerusalem."[6]

As is seen in both selections, from Patriarch Dositheus and from the Constantinopolitan Council, the issuance of indulgences was bound up with the power of the Orthodox Patriarchs. The attribution to the Patriarchs (and only to them, as may be seen in the text of the "Confession") of the power to forgive sins and to issue special certificates were distorted rudiments of the old institution of the Pentarchy, which was formulated after the fourth Ecumenical Council and indubitably underwent a crisis in the epoch of Turkish government and the spread of Latin influence. In the consciousness of the Greeks of that era, who had by that time become quite used to thinking in western stereotypes, the power of the Orthodox patriarchs was in large associated with the power of the Roman Pope.

In their polemic with Latinity, the Greeks didn’t cast doubts so much on the phenomenon of indulgences, but rather on the Roman Popes ascribing exclusively to themselves this right to forgive sins Thus, in the 13th clause of the council’s Confession, it is said, "to say, then, that the power to issue (indulgences) is possessed only by the Roman Pope is a plain lie.[7]"

It’s remarkable that even such a theologian and expert on the canonical tradition of the Church as Venerable Nicodemus of the Holy Mountain not only did not oppose, but participated in the practice of indulgences. Thus, in his letter to Paisius, Bishop of Stagonas, who at that time was living in Constantinople, dated April 1806, he asks him to get an Absolution Certificate at the Patriarchate for a “living” monastic, also named Nicodemus, and send it to him. He promises him that he would send the money necessary to purchase the certificate as soon as he knows how much it would cost.[8]

Indulgences as a means of enrichment were condemned at the Council of Constantinople in the year 1838. That Council, like the Council of the year 1727, was devoted to the extermination of Latin dogmas and usages. Its main theme was the Unia. An Encyclical, published by the Council, was signed by the Patriarch of Constantinople, Gregory VI and the Patriarch of Jerusalem, Athanasius and also eleven hierarchs of the Constantinopolitan Synod. The text was likewise sent to the absent Patriarchs, Hierotheus of Alexandria and Methodius of Antioch.[9]

In the 9th clause of the encyclical, the "horrid and unheard-of evil usage, originating in arrogance, by which the bishops of Rome employ the most holy most sacred, and most awesome articles of belief of the sacred Christian Faith as a means to raise money” is condemned.[10] The only thing addressed by this condemnation is the taking of money for the forgiveness of sins, even if only in Jubilee years. The existence of indulgences per se, once again, is not met with a needed theological evaluation by a Council. Likewise, in that Encyclical, the Greek Church’s practice, analogous to that condemned by the Council, is neither mentioned nor condemned. In addition, it was difficult even for Council decisions to eliminate a practice so popularly rooted. That this practice was popularly rooted is shown by the fact that “Absolution Certificates” lasted in Greece until the middle of the twentieth century.[11]

[4] For the text of the Encyclical published by the Council of 1722, see I. Karmiris: Ta Dogmatika kai Symvolika mnimeia tis Orthodoxou Katholikis Ekklisias (The Dogmatic and Symbolic Monuments of the Orthodox Catholic Church) Graz, Austria, 21968, pp. 822-859

Translated by Bishop Tikhon of San Francisco & the West The Difference Between Orthodox Spirituality and Other Traditions
Met. Hierotheos Vlachos
The dogmas are the results of decisions made at the Ecumenical Councils on various matters of faith. Dogmas are referred to as such, because they draw the boundaries between truth and error, between sickness and health. Dogmas express the revealed truth. They formulate the life of the Church. Thus they are, on the one hand, the expression of Revelation and on the other act as "remedies" in order to lead us to communion with God; to our reason for being.

Ascension of the Lord — Peace, Holy Spirit , and Forgiveness of Sins
Archbishop Andrei (Rymarenko)
If, during the course of six weeks, the Holy Church has been teaching us to preserve this peace which Christ granted on the first day of His Resurrection, saying: "Peace be unto you" (Jn. 20:19), then now this feeling of peace should fill our hearts. You see, this feeling of peace appears in all of us as an expectation of joy. People search for some kind of rest, some kind of comfort. For this they travel from place to place in order to find peace. And yet this peace is within them, only in an unrevealed state.