DIVIDE AND RULE – THE ANCIENT PRINCIPLE 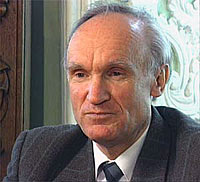 According to INTERFAX Agency, 407 people have been killed in Moscow in the past several years as a result of terrorist acts. The tragedy in Beslan took away between 338 and 450 lives, including children’s, casualties in Northern Osetia total 1221 people. Not to mention the number of lives wrecked by the tragedies , tears shed and hopes lost. One cannot measure all the pain in the souls of those who have lost their family and friends forever.

Witnessing the events and meeting the participants we often hear: ‘Why?’ or ‘What did my nine-year-old do to deserve it? Why did I have to collect her body in pieces after the explosion of the metro car? I have never been interested in dirty political games, black market or oil wars. I love my job. I worshipped my wife and daughter who I have lost…Why?’

Today we talk to Alexei Osipov, the Professor of Moscow Theological Academy, a famous scientist, theologian and public commentator.

- Professor, the first question is in the air today, the question of those who probably have more faith than cynicism. One rural school teacher voiced it after the capture of hostage and death of children in Beslan. What is happening?

- The question is simple and original. But similar events happen throughout human history, even when you could count existing people on one hand. Even back then, Cain killed Abel.

Christians among us can clearly see that the state of the soul of modern man and the state of the society is deeply unhealthy, otherwise there would be no war. If you think of it, what does mankind strive for throughout its history? For happiness, peace, justice, harmony and love…What is our history filled with? Wars, violence, slavery and cruelty.

Admittedly, once people used to think that human imperfection is to blame, and that humans would grow and get better and better, and that time would come—18th, 19th, 20th century at the latest—when mankind would reach the peak of its development. But the amount of violence and blood shed in the 20th century exceeded the cruelty of all the preceding ages. Christianity alerts us to this fact, this reality, but it also reminds us that each of us has good and evil within us; i.e. a healthy and unhealthy nature. Which of them we grow and nourish depends only on us. The sum of individual personalities make up the spiritual heart of a nation, country and all humankind. There is an immutable law—spirit creates a form for itself.

It is just amazing, how in our contemporary world things are actively put, planted, forced into human souls. Have you ever thought about why, figuratively speaking, 99 percent everything on television is filth while only one percent is good? What is the reason for this? Who wants it? Don’t we understand what the spread of immorality, violence and cruelty leads to? Nonetheless, this is the reality of life not only in Russia, but in the rest of the civilized world.

- Is it because of the character of human desires and values?

- Well yes; but if, for example, a referendum was held, then I am sure more than two thirds of any country's population would speak against the predominance of the evil in any mass media. By the way, that would be a democratic principle and the voice of the majority. Nevertheless, all this filth is in somebody’s interest.

- Certain individuals’ interest? Many talk and write about secret societies, about how they ‘‘play chess’’ with entire nations on their world chess-board.

- Perhaps such people exist. They came together and created secret societies. But what for? What would they gain?

- Maybe they are fighting for the general principle of power, which goes together with the crown jewels and all the paraphernalia of world dominion?

- The thing is that throughout human history, two natures have been fighting. I would call them religious and antireligious, or satanic.

Christianity gave the world a standard of life not known by the ancients. A god of the ancient world was fair at best and a personification of cruelty and immorality at worst. Christianity announced that God—that is the Absolute Law of Being—is Love. Humankind hadn’t known that. Christianity revealed the essence of our nature. But also through that, it revealed the opposite in its fullness and brightness as well, the opposite that destroys a man. So throughout our history we witness the struggle of religion and its opposite—anti-religion or Satanism, and this fight is getting more and more severe. The way a society develops depends on the extent of its subordination to one of these directions.

- When estimating what is happening today, can you say that all the leading religions are being exterminated?

- All the religions which carry a moral core are being exterminated. Look at what is happening. The New Testament says in black and white what sodomy is, however, today a number of Churches already openly justify this phenomenon. There already exist many translations of the Holy Scripture into western languages, where these citations, for instance, extracts of Apostle Paul’s writings, are either omitted or translated in the opposite way. There is a religious justification of natures directly opposite to those that are the foundation of the human life.

Regard the recent events in the light of this idea. We are horrified by the catastrophe in Beslan without trying to see the origin of the tragedy. You can hear shouts: “This is Islam!" Sorry, but what about the Crusades—were they Islamic as well? In what faith can’t we find people who are ready to pervert the teaching, who are spreading something opposite to the religion they profess?

Here is an example from pre-revolutionary Russian history. It happened during the First World War. The Germans captured several thousand Muslims from the Russian Empire, and Emperor Wilhelm ordered that they all be sent to an exemplary camp. Marvellous! They even constructed a mosque for them. When everything was finished, a court dignitary arrived to have a look at the job. He was quite please with what he saw. The soldiers were pleased as well, and there were mullahs among them. But the most interesting thing was when they responded to his request to sing a prayer for him. Do you know what they sang? ‘God Save the Tsar’.

Even when the dignitary flailed his hands in indignation, they interpreted his gesture in their own way and fell to their knees, and then sang it three times like that! So, Muslim soldiers always served in the Orthodox Russian Army, and there was no antagonism at all. Really, we can see people living side by side without any hatred.

What is done nowadays? Hatred is kindled, through television, through newspapers. Thus, Beslan works as one of the powerful provocations, so that everyone would rise and say, "Let’s go and beat the Muslims". They [the media] count on that.

- Professor, could you suggest who is behind the the conflict?

- To make this kind of suggestions is the job of politicians; we can see only the surface, not knowing what goes on behind closed doors, and we are unlikely to be allowed in….That is why I don’t want to read the tea leaves: who did it and how. But bear in mind that an equally powerful provocation took place in America on September 11. And who is accused? Muslims. But when the same America devastates Serbia, intrudes in Iraq; when women and children are killed in much greater numbers—it is all right.

Divide and rule is the ancient principle. Christianity is a powerful religion, Islam is a powerful religion…What if we cause a collision between them? Do you remember a story where one tailor won a victory over two giants? Those who have an absolutely different outlook on life are fighting with religion. We cannot believe that Satanism is not just playing games with some young people. Satanism is an ideology—I don’t know whose, but there is no doubt that people who have colossal opportunities in this world are infected by this ideology. You can’t explain the facts, like that the terrorists in Beslan wouldn’t put forward any demands; they didn’t have any. Why, what is the reason? Nobody answers. The provocation is obvious.

Satanists could be among any nations, any races. As it is known, there is a black sheep in every flock.

- Thus, in this case, oil, money and power are just a mechanism, which supports something much more significant that never would be mentioned in the news?

- It is not a matter of material gain. Is it profitable for a sadist when he tortures his victim? Ask him why, and he will just smirk. Passion is a horrible thing. We still have no idea what stands behind the term ‘Satanism’. It is evil, and God forbid witnessing the limitlessness of this evil. And this evil, this malice is looking to express itself somehow. Satanism is a force, an acting force. Now even a psychologist could explain some of the formulas of the perverse pleasures of our fallen nature, only they would portray everything in graver tones. Where is the common sense? Why would anyone like suffering, blood, and torture? I can’t find any other explanation from a Christian point of view.

- Professor, if we look at the mechanics of what is happening, we can say that a systematic instigation of war is being carried out. Is it a war for extermination?

- It is appears that, yes. The first reason is worldly: six billion people—that is a lot. Secondly, religious ideals sicken somebody and are in the way of something. Still too many people are at least to a small extent familiar with an inner idea of "wrong". Hence—divide and rule, and if you can cause nations to clash, a war is unavoidable.

Why does the New Testament speak with such fear about Antichrist and the end of the world, about what people will be like and what awaits them? Because the freedom of evil will be opened. At present a restraining force still exists; there are still many people who haven’t lost their conscience, who fight for the truth and justice, who preach love.

- Is it easy to realize that?

- It is very important to show what the meaning of freedom is—where true freedom is, and where there is the freedom of arbitrariness.

Genuine freedom is when a man can control himself, when he is not at the whim of his passions, and his soul by nature strives after God/Truth, and this thirst is infinite. The opportunity to “freely” get thrilled in passions brings people down to the level of beasts and results in what we watch in the news, shuddering. We should remember that man by his nature is finer than a beast, yet is capable of falling to the devil’s level.