Saint Ioane (Saakadze) of Manglisi was born in 1668 and spiritually nurtured in the Davit-Gareji Wilderness. Outstanding in virtue, Ioane was quickly ordained a hieromonk, and soon after consecrated bishop of Manglisi.

In 1724 St. Ioane left Davit-Gareji for Derbend, Dagestan, where he constructed a wooden church and began to preach Christianity among the local people. He labored there with eleven other pious believers. St. Ioane’s humble life and the miracles he performed attracted the attention of the Muslim Dagestanis, and even the government took notice of his tireless evangelical activity.

At that time the Georgian King Vakhtang VI (1703–1724) and Tsar Peter the Great of Russia were corresponding regularly about the evangelization of the Caspian seacoast. Both kings recognized the importance of St. Ioane’s activity in regard to this matter, and they generously contributed to his efforts. With their help, St. Ioane built one church in honor of the Nativity of the Theotokos and another in honor of Great-martyr Catherine.

In 1737 Ioane left his disciples in Dagestan and journeyed to Astrakhan, near the place where the Volga flows into the Caspian Sea. There he constructed a church in honor of St. John the Evangelist, which was converted into a monastery in 1746. ArchimandriteGerman, one of St. Ioane’s disciples, was elevated as abbot of this monastery.

While in Astrakhan, St. Ioane discovered that many ethnic Georgians were passing through the city of Kizliar in Ossetia, but they did not have a church in which to celebrate the divine services. So he traveled to Kizliar and, with help from his kinsmen, built a church and opened a preparatory school for clergy nearby.

On March 28, 1751, St. Ioane reposed in Kizliar at the age of eighty. He was buried in the church that he himself had constructed.

Later, by order of King Teimuraz II (1744–1761), the myrrh-streaming relics of St. Ioane were translated to Tbilisi and buried in Sioni Cathedral, in front of the Manglisi Icon of the Mother of God.

O Holy Hierarch Ioane, who art robed in divinity, protect us by thy grace and intercede with Christ God to save our souls! 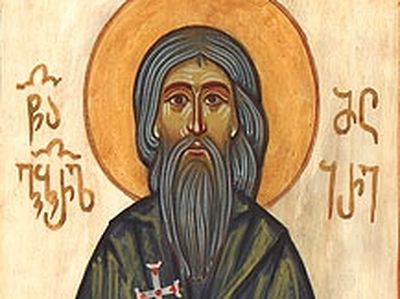 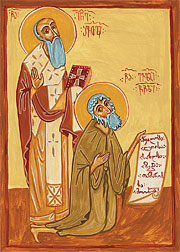 Venerable Ioane of Shavta, Bishop of Gaenati, and Evlogi the Prophet and Fool-for-Christ (13th century)
Archpriest Zakaria Machitadze
The great Georgian hymnographer, philosopher, and orator St. Ioane of Shavta labored in the 12th and 13th centuries, during the reign of the holy queen Tamar. Few details of his life have been preserved, but we know that he received his education at Gelati Academy, where he studied theology, ancient and Arabic history, philosophy, and literature. He was later tonsured a monk and labored at Vardzia Monastery.
See also Venerable John the Long-Suffering of the Kiev Near Caves
The saint prostrated himself and said: “Lord! Why did You leave me for so long in torment?” “I tried you according to the power of your endurance,” was the answer. “I brought upon you temptation, so that you might be purified like gold."