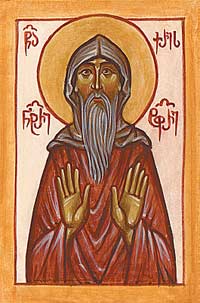 Blessed Kristesia’s family was from Egrisi in western Georgia. From his youth Kristesia longed for the divine services and the solitary life, but he was forced by his master to marry, and by this marriage he begot a son. Later, when both his wife and son had died, his master insisted that he marry again, but the pious Kristesia would not heed his master’s order.

The holy father spent many years in humble service to the Lord. He was assigned to gather firewood and bring water for the monastery, and he performed these tasks obediently and in perfect meekness. Every day he walked over four miles to fill a pitcher with water and then carried it to a small hut nearby. He hung the pitcher at the entrance to make it visible from a distance, and travelers who passed by would come to quench their thirst. He also kept a small vegetable garden to feed the passers-by. Every Saturday he prepared kolio (a dish of wheat and honey traditionally offered to commemorate the departed) and divided it in three parts: one part commemorated the family and loved ones of those who had donated the wheat and honey; the second, the deceased fathers of the monastery; and the last, all departed Orthodox Christians.

It always disturbed St. Kristesia to see his brothers and sisters at odds with one another, so when he heard that two people were quarreling, he would go and reconcile them. “My children!” he would say, “If you do not heed my words, I will leave in sorrow, and the devil, who is always resistant to peace, will rejoice and send more tribulations upon you. I came to you hungry, and I will depart hungry!” His words warmed the hearts of those whom he counseled and helped them to be reconciled with one another.

One hot evening after Vespers, St. Kristesia set off on foot for a certain village. He left during twilight, and when night fell the sky was without a moon and extraordinarily dark. Before long it became difficult to walk any farther, so St. Kristesia stopped to pray, and a bright light appeared before him to light the way. The divine light guided him all through the night, until he reached the village of Sartichala.

St. Kristesia’s cell was poor and cramped. He slept on a bed of wooden planks that he covered in sheepskin, and instead of a pillow he rested his head on a stone. The pious ascetic wore a sheepskin coat and sandals made of bark. Whatever he received he gave to the poor. Having placed complete trust in God, he would not permit himself to worry about the morrow, nor did he bother to store up food or supplies for the harsh winter months.

Father Kristesia was already advanced in age when he was tonsured a monk and given the new name Kristepore. He reposed peacefully in 1771, at the age of eighty.

O Holy Father Kristepore, entreat thy beloved Christ God to have mercy on our souls! 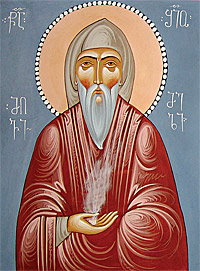 Repose of Venerable Shio of Mgvime (6th century)
Archpriest Zakaria Machitadze
An Antiochian by birth, St. Shio of Mgvime was among the Thirteen Syrian Fathers who preached the Christian Faith in Georgia. His parents were pious nobles who provided their son with a sound education.

Venerable Ekvtime of Mt. Athos, the Translator(†1028)
Archpriest Zakaria Machitadze
Venerable Ekvtime of Mt. Athos was the son of St. Ioane of Mt. Athos, a military commander during the reign of King Davit Kuropalates, who abandoned the world to enter the monastic life.While St. Ioane was laboring on Mt. Olympus, the Byzantine emperor returned a large portion of the conquered Georgian lands, but in exchange for this benefaction he ordered that the children of certain eminent aristocrats be taken to Constantinople as surety.
See also

Holy Hierarch Zosime of Kumurdo (16th century)
Archpriest Zakaria Machitadze
Saint Zosime of Kumurdo lived and labored from the endof the 15th century through the first half of the 16th century.To the world he was known as Zebede. He was raisedby Princess Ketevan, the daughter of King Giorgi VIII(1446–1466).