According to Holy Tradition, St. Nino and Great-martyr George were blood relatives. At the same time as St. George’s martyrdom, a certain nobleman, the servant of God Zabulon, arrived in Rome from Cappadocia. Zabulon began to serve in the emperor’s army, and before long he was widely recognized as a courageous cavalryman and a fine soldier.

During a battle with the Franks the Lord granted victory to Zabulon — he captured the Frankish king and his suite and delivered them to the Roman emperor. The emperor sentenced the captives to death, but before they were executed they confessed their desire to be baptized into the Christian Faith. Zabulon relayed this to the emperor, and Zabulon himself became their godfather. Then he pleaded with the emperor to have mercy on his godchildren, and the emperor set them free.

Nearly all the Franks were converted to Christianity as a result of Zabulon’s struggles on behalf of the Faith. A 9th-century Georgian hymnographer wrote, “Her father Zabulon converted Gaul with his sword, and blessed Nino converted Georgia with the Life-giving Cross.”

Some time later, St. Zabulon journeyed to Jerusalem on a pilgrimage. While he was there he distributed all his possessions to the poor and began to serve Patriarch Juvenal of Jerusalem. There he met Sosana, the sister of the patriarch. Shortly thereafter they were joined in marriage by the patriarch.

The newly wedded couple moved to Cappadocia, where they had a baby girl whom they named Nino. While raising Nino, St. Sosana served God and the needy with great dedication.

When Nino reached the age of twelve, her parents sold all their possessions and moved back to Jerusalem. With the blessing of Patriarch Juvenal, Zabulon departed for the wilderness to begin a life of asceticism. The place where he labored is known only to God. With the patriarch’s blessing, Sosana ministered to the poor and infirm. On December 10, 1996, the Georgian Orthodox Church declared Zabulon and Sosana, the parents of St. Nino, confessors of the Christian Faith. Living during a time when pagan religions were still widely practiced and Christians were often persecuted, they converted many people and then abandoned worldly things to follow God alone.

Through the prayers and intercessions of Sts. Zabulon and Sosana, new luminaries of the Georgian Church, may the Most Holy Trinity bless all who in faith and love pray unto them! 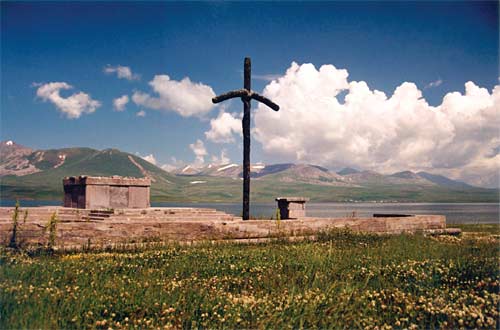 Entrance of the holy Equal-to-the-Apostles Nino
Archpriest Zakaria Machitadze
Holy Apostles Andrew the First-called and Simon theCanaanite first preached the Christian Faith in Georgia inthe 1st century, but at the beginning of the 4th centurymost of the country was still pagan. 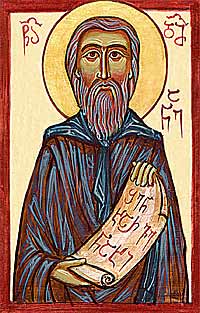 Venerable Damiane (†1157)
Archpriest Zakaria Machitadze
Saint Damiane (in the world King Demetre I) was the son of Holy King Davit the Restorer. King Davit proclaimed his son co-ruler of Georgia and crowned him with his own hands. He declared that his son Demetre, through his wisdom, chastity, bravery, and handsome appearance, would rule Georgia better than he himself had.
See also Venerable Basil Ratishvili (13th century)
Archpriest Zakaria Machitadze
Saint Basil Ratishvili, one of the most prominent figures of the 13th-century Church, was the uncle of Catholicos Ekvtime III. He labored with the other Georgian fathers at the Iveron Monastery on Mt. Athos. Endowed with the gift of prophecy, St. Basil beheld a vision in which the Most Holy Theotokos called upon him to censure King Demetre’s impious rule. Venerable Father Pimen, Fool-for-Christ and Enlightener of Dagestan, and His Companion Anton Meskhi, the Censurer of Kings (13th century)
Commemorated March 16/29
Archpriest Zakaria Machitadze
Saint Pimen the Fool-for-Christ and Anton Meskhi (of Meskheti, in southern Georgia) lived in the 13th century, when the Mongols were regularly invading Georgia. The entire country, and the Church in particular, languished under the yoke of Mongol oppression. The Georgian people were once again faced with a terrible choice: to preserve their temporal flesh or attain spiritual salvation. Most would not yield to the temptation of the enemy and chose instead to die as martyrs for Christ.
×