Saint Ioane was born the son of a nobleman during the reign of King Davit Kuropalates.

For his love of Christ he left his family and the world to be tonsured a monk. After informing the royal court of his decision, St. Ioane received a blessing from his spiritual father to travel to Greece, where he settled at a monastery on Mt. Olympus.

At that time, as a “sign of friendship,” the Byzantine emperor returned the Georgian lands he had conquered to King Davit Kuropalates, but as a “sign of dedication,” he demanded that children of the nobility be sent as surety. Among those sent to Byzantium was St. Ioane’s son, Ekvtime. St. Ioane begged the Byzantine emperor to release his son, and when Ekvtime was finally freed, Ioane took him back with him to the Monastery of St. Athanasius the Athonite (the Great Lavra).

At that time the famed Georgian military commander Tornike Eristavi came to visit St. Ioane. Tornike was soon tonsured a monk and given the new name Ioane (the saint is commemorated as Ioane-Tornike), and he settled at the Monastery of St. Athanasius the Athonite as well.

Soon the Georgian faithful began to flock to the Monastery of St. Athanasius, and Ioane withdrew from the monastery to a more secluded place, where he constructed a cell and a church in honor of St. John the Theologian. Two more churches were later built in that same area in honor of theMost Holy Theotokos and St. John the Baptist. In such a way the celebrated Iveron Monastery of Mt. Athos was established, with St. Ioane as its first abbot.

After the repose of his faithful friend and assistant St. Ioane- Tornike, it became difficult for St. Ioane to continue to labor on the Holy Mountain. He and several of his disciples planned to leave Athos, but in the end they remained at the insistence of the Byzantine emperor.

Ioane soon fell ill with gout and was bedridden for several years. Prior to his death he summoned his son, Ekvtime, confessed to him his sins, and designated him abbot of the Iveron Monastery. He told his son that St. Giorgi (later “the Builder”) should succeed him as abbot, then blessed all the brothers and “fell asleep among the ranks of the righteous in the arms of his son.”

St. Ekvtime robed the holy relics of his fleshly and spiritual father in costly linens and later erected a church in honor of the Archangels over his grave.

St. Gabriel was a monk of the IveronMonastery on Mt. Athos. In summer he would withdraw to the inaccessible cliffs, and in winter he would return to the monastery and observe a strict rule of silence. Clad in a coarse robe and eating nothing but roots and herbs, St. Gabriel was truly a “heavenly man and an earthly angel.”

Once, at dusk, the monks of the monastery beheld a pillar of light shining forth upon the sea. The vision lasted for several days, and finally monks from every monastery on the Holy Mountain gathered and descended together to the sea.

They beheld an icon of the Mother of God shining brilliantly and floating upright upon the surface of the water. The fathers lowered a boat onto the water, hoping to bring the icon back with them to the shore, but each time their boat approached the icon, it drifted farther out to sea.

Finally the frustrated monks offered prayers and supplications to God in order to discern His will, and the Most Holy Theotokos appeared in a divine revelation and told them that the monk Gabriel alone was worthy to bring the icon bearing her image out from the sea. At the same time, she appeared to the God-fearing Gabriel and told him, “Enter onto the sea and walk out upon the waves with faith, and I will send my love and mercy upon all the monks of this monastery.”

The elders of Mt. Athos located the rocky dwelling of the hermit Gabriel not far from the Iveron Monastery. They brought Gabriel with them and went down to the sea with hymns and censing. Gabriel stepped out onto the water and, walking upon the waves as upon dry land, approached the icon. At the same time, the holy image drew nearer to him. Clutching the holy icon to his breast, Gabriel crossed back over the waves and delivered the icon safely to the shore. (The story of the miraculous Iveron Icon of the Theotokos is recounted in detail in the commemorations for February 12.) St. Gabriel reposed peacefully on Mt. Athos.

By your deeds ye shone forth among men and filled the earth with divine gladness, O Holy Fathers Ioane and Gabriel. Intercede with Christ God to have mercy on our souls! 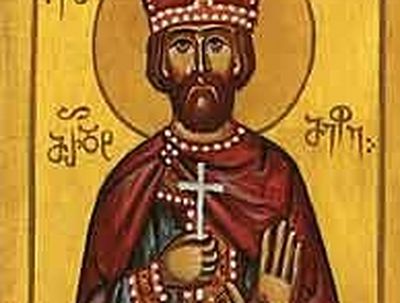 Holy Royal Martyr Mirdat, King of Kartli (†410)
Archpriest Zakaria Machitadze
King Mirdat (408–410), the son of Varaz-Bakur, was the first martyred king of Georgia. He was raised by his maternal grandfather, King Trdat. 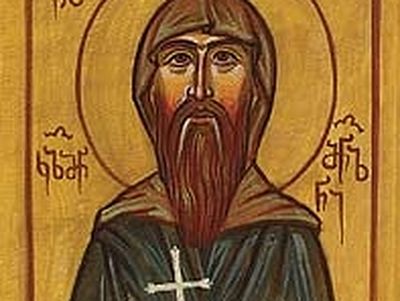 Holy Hieromartyr Kozman (†1630)
Archpriest Zakaria Machitadze
Over the centuries the monastic complex founded by St. Davit of Gareji became a spiritual and cultural center for all of Georgia.Many of the faithful flocked there with a desire to serve Christ. Among them was the hieromonk Kozman, who would end his earthly life as a martyr.
See also The Day of the Holy Trinity. Pentecost:The Gospel of the Descent of the Holy Spirit
From the collected works of St. Nicholai (Velimirovich)