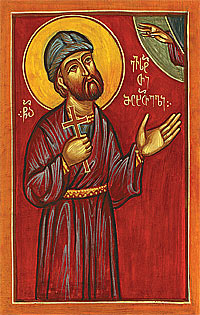 Saint Evstati, a Persian by descent, was a fire-worshipper named Gvirobandak prior to his baptism into the Christian Faith. When he arrived in Georgia and settled in Mtskheta, he was deeply drawn to the morals and traditions of the Georgian people, and he resolved to convert to Christianity.

His decision entailed a great risk, as the Persians dominated eastern Georgia, persecuting Christians and forcing all to worship fire, as they did. Catholicos Samoel himself baptized Gvirobandak and called him Evstati. The new convert soon married a Georgian woman and was fully assimilated into Georgian society and the life of the Church.

Once the Persians who were occupying Mtskheta invited Evstati to a celebration, but he declined, saying, “I am stamped with the seal of Christ and far removed from every darkness!”

After the celebration the fire-worshippers reported Evstati to Ustam, the chief of the Mtskheta Fortress. The chief summoned Evstati and threatened him, saying, “You will not remain a Christian without punishment. If you do not voluntarily turn back from this way of misfortune, severe tortures will await you!”

St. Evstati calmly answered him, saying, “For the sake of Christ I am prepared to endure not only torture but even death itself with rejoicing!” Since he himself did not have the authority to punish Evstati, Ustam sent the accused to the marzban Arvand Gushnasp. Then the informers appeared again before Ustam and reported that seven more fire-worshippers had converted to Christianity. All eight of them were bound in chains and escorted to Tbilisi.

The furious marzban ordered his servants to shave the captives’ heads and beards, bore holes in their noses, hang weights round their necks, fetter their bodies in chains and cast them into prison. Anyone who denied Christ was to be pardoned. Two of the victims, Bakhdiad and Panagushnasp, could not bear the suffering and denied Christ.

Six months later Arvand Gushnasp was summoned to Persia, so Catholicos Samoel, the chieftain Grigol of Mtskheta and the nobleman Arshusha took advantage of the opportunity and requested that he release the imprisoned Persian Christians. Arvand Gushnasp yielded to the request of the Georgian dignitaries, but warned that the Christian converts would soon meet their deaths.

Meanwhile, the betrayer Bakhdiad fell ill with epilepsy and died, while Panagushnasp lived on in terrible poverty.

Three years later Vezhan Buzmir was appointed the new marzban of Kartli, and the pagan priests again reported on Sts. Evstati’s and Stepane’s conversion. St. Evstati asked to see his family and said to them: “Farewell, for I am not destined to return home again. I will not betray Christ, and for this they will not forgive me. Imprisonment and beheading await me in Tbilisi. My remains will be brought here according to God’s will.”

Evstati and Stepane were escorted to the new marzban, and Evstati declared before him that he would not deny Christ. The enraged marzban ordered that he be cast into prison and that his head be chopped off that night and his body thrown behind the fortress wall, to be torn to pieces by the birds. As directed, the marzban’s servants beheaded the saint and cast his body into the abyss behind the fortress wall.

But a group of faithful Christians located St. Evstati’s body and carried it in secret to Mtskheta. Catholicos Samoel met the holy relics when they arrived, and with great honor they were buried in Svetitskhoveli Cathedral under the altar table.

Rightly hast thou acquired thine honorable name, O invincible Martyr Evstati. Cease not to protect those who sing unto thee! 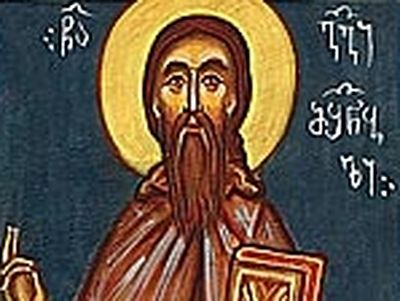 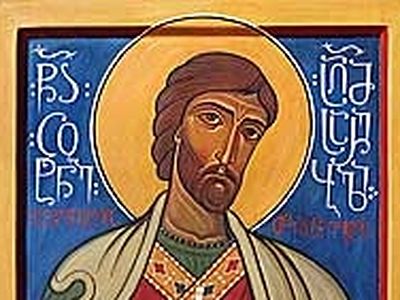 Saint Cuthman of Steyning
Commemorated February 8/21
Dmitry Lapa
St. Cuthman of Steyning, one of the most venerated saints in southern England, probably lived in the late 7th to early 8th century. He is best remembered in the small town of Steyning in West Sussex. Sussex people have for many centuries venerated him for his meekness, humility, love, compassion, closeness to the people and many miracles. Saint Antimos of Iberia, Metropolitan of Wallachia (†1716)
Archpriest Zakaria Machitadze
Saint Antimos of Iberia was one of the most highly educated people of his time. He was fluent in many languages, including Greek, Romanian, Old Slavonic, Arabic, and Turkish and well-versed in theology, literature, and the natural sciences. He was unusually gifted in the fine arts — in painting, engraving, and sculpture in particular. He was famed for his beautiful calligraphy. Finally, St. Antimos was a great writer, a renowned orator, and a reformer of the written Romanian language.