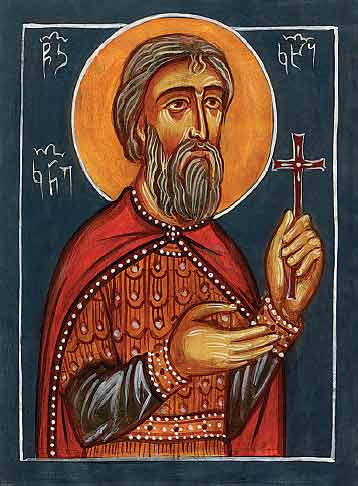 Тhe 9th century was one of the most difficult periods in Georgian history. The Arab Muslims wreaked havoc throughout the region of Kartli, forcibly converting many to Islam with fire and the sword. Many of the destitute and frightened were tempted to betray the Faith of their fathers.

At that time the valorous aristocrat and faithful Christian, Prince Constantine, was living in Kartli. He was the descendant of Kakhetian princes, hence his title “Kakhi.”

As is meet for a Christian believer, St. Constantine considered himself the greatest of sinners and often said, “There can be no forgiveness of my sins, except through the spilling of my blood for the sake of Him Who shed His innocent blood for us!”

While on a pilgrimage to the holy places of Jerusalem, Constantine distributed generous gifts to the churches, visited the wilderness of the Jordan, received blessings from the holy fathers, and returned to his motherland filled with inner joy. After that time Constantine would send thirty thousand pieces of silver to Jerusalem each year. In the years 853 to 854, when the ArabMuslims invaded Georgia under the command of Buga-Turk, the eighty-five-year-old Prince Constantine commanded the army of Kartli with his son Tarkhuj.

Outside the city of Gori an uneven battle took place between the Arabs and the Georgians. Despite their fierce resistance, the Georgians suffered defeat, and Constantine and Tarkhuj were taken captive.

Strengthened by divine grace, the courageous prince fearlessly answered, “Your sword does not frighten me. I am afraid of Him Who can destroy my soul and body and Who has the power to resurrect and to kill, for He is the true God, the almighty Sovereign, Ruler of the world, and Father unto all ages!”

The enraged caliph ordered the beheading of St. Constantine- Kakhi. Bowing on his knees, the holy martyr lifted up a final prayer to the Lord. St. Constantine-Kakhi was martyred on November 10, 852, the day on which Great-martyr George is commemorated.

The holy martyr’s body was hung from a high pillar to intimidate the Christian believers, but after some time it was buried. A few years later a group of faithful Georgians translated St. Constantine’s holy relics to his motherland and reburied them there with great honor. In that same century the Georgian Orthodox Church numbered Prince Constantine-Kakhi of Kartli among the saints.

To the champion leader Constantine, the valiant warrior and chosen of Christ, who didst defeat the power and kingdom of darkness and submit to earthly torture, we offer hymns of praise for thy victory on earth: Rejoice, O Holy Martyr, invincible one! 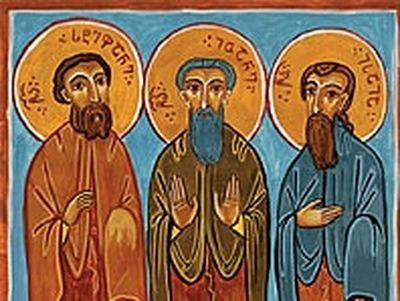 Holy and Righteous Ioane, Stepane, and Isaiah the Georgians
Archpriest Zakaria Machitadze
Among the multitude of saints we remember those Christianswho dedicated their earthly lives to glorifying Godand serving others. In a single lifetime they performed allthe spiritual feats of the venerable and devout fathers, confessors,and martyrs. 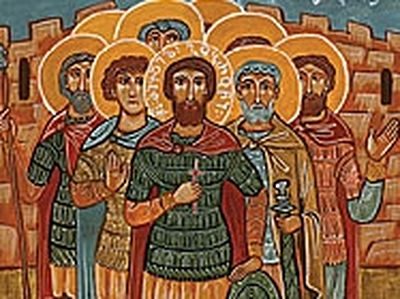 Great-martyr Mikael-Gobron and His 133 Soldiers (†914)
Archpriest Zakaria Machitadze
In the year 914 a certain prince by the name of Mikael- Gobron distinguished himself in a battle against the Arab Muslim invaders. After they had captured the fortress of Kvelistsikhe in southern Georgia, theMuslims took captive those who remained alive, and Prince Gobron was among them. Deeply impressed by the Georgian soldier’s valor, the emir Abu al-Qasim ordered his army to treat him with respect.
See also Emperor Constantine the Great (306–337). The Importance of His Faith in the History of the Church
V. Rev. Fr. Thaddaeus Hardenbrook

Emperor Constantine the Great (306–337). The Importance of His Faith in the History of the Church
V. Rev. Fr. Thaddaeus Hardenbrook
St. Constantine the Great, Equal to the Apostles, First Christian Emperor of Rome, builder of Constantinople and founder the Byzantine Empire. He is a military victor, effective ruler and glorified saint. There is no doubt that his contribution to world history and that of the Orthodox Church is indeed spectacular. Great-martyrs Davit and Constantine (†740)
Archpriest Zakaria Machitadze
The 8th century was extremely difficult for theGeorgian people. Marwan bin Muhammad (called “the Deaf” by the Georgians and “the Blind” by the Armenians), the Persian ruler and military leader for the Arab caliph, invaded eastern parts of the Byzantine Empire, then Armenia and Georgia. With fire and the sword he fought his way across Georgia from the east to the city of Tskhumi (now Sokhumi) in the region of Abkhazeti. The princes Davit and Constantine Mkheidze of Argveti were faithful Christians and skilled military leaders. When they heard about the enemy’s invasion, the brothers prayed to God for protection, assembled their armies, and urged their people to pray fervently for God’s help. Holy Hieromartyr Kirion, Catholicos-Patriarch of All Georgia (†1918)
Archpriest Zakaria Machitadze
Holy Hieromartyr Kirion II (known in the world as Giorgi Sadzaglishvili) was born in 1855 in the village of Nikozi in the Gori district. His father was a priest. He enrolled at the parochial school in Ananuri, then at the theological school in Gori, and finally at Tbilisi Seminary.
×