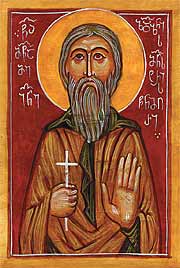 While performing thy holy works, thou wast enlightened by Christ Jesus and wast crowned as a star in the heavens by Him. O Holy Martyr Ioane, hear our prayers and have mercy on us!

All Saints of Georgia
Commemorated December 11/24
Archpriest Zakaria Machitadze
Saving examined the history of Georgia and the hagiographical treasures attesting to the faith of the Georgian nation, we become convinced that Heavenly Georgia — the legion of Georgian saints, extolling the Lord in the Heavenly Kingdom with a single voice — is infinitely glorious. 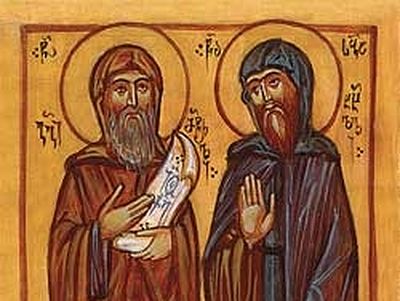 Venerable Giorgi the Scribe and His Brother Saba, of Khakhuli (11th century)
Archpriest Zakaria Machitadze
Saints Giorgi and Saba of Khakhuli were brothers of Iakob, the father of St. Giorgi of the Holy Mountain. Giorgi and Saba labored as monks at Khakhuli Monastery in southern Georgia.
See also Holy Hierarch Ioane of Khakhuli, Also Called Chrysostom (10th–11th centuries)
Archpriest Zakaria Machitadze
In the second half of the 10th century King Davit Kuropalates founded Khakhuli Monastery in the historical region of Tao, at the gorge of the Khakhuli River, where it joins the Tortumi River.