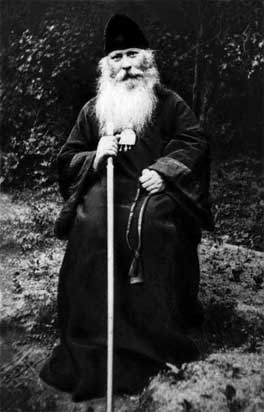 Saint Seraphim (Nikolai Zvezdinsky) was born on April 7, 1883. Many years later he would often remember the words out of the Lenten Triodion read in church on the day he was born, My Son, give me thine heart, and let thine eyes observe my ways (Proverbs 23:26-27). In these words he saw foresaw his future monastic life.

Bishop Seraphim’s grandfather, Gabriel Bonefatiev, was a dedicated and fierce activist for the Old Believer Church. However, his father, Ivan Gavrilovich, left his family home at a young age in search of spiritual enlightenment and the true Faith. Leaving behind his family, he embarked on a journey to Petrograd barefoot. It was here in an “Edinoverets” Church (an Old Believer Church which is part of the canonical Russian Church) that he found the true Church and acquired peace in his soul. After joining the Orthodox Church he was given the last name Zvezdinsky by order of the Emperor, and was soon ordained a priest. For the quarter century he was a clergyman, Archpriest John Zvezdinsky brought many people out of the Old Believer schism into Orthodoxy.

Fr John’s service to God brought God’s mercy upon his family. They received spiritual attention and guidance from the not yet canonized elder Seraphim of Sarov. Amongst the Sarov Saint Seraphim’s relatives there had also been old believers who joined the Orthodox Church. Fr John Zvezdinsky’s labours were apparently very dear, close, and solicitous to Saint Seraphim of Sarov, and thus he became the family’s heavenly protector. In 1903, whilst Father John was writing a service in honour of St. Seraphim, the elder appeared to him and foretold the fate of his children. At one point his youngest son, Nicholas Zvezdinsky (Future Bishop Seraphim), was suffering from a life-threatening disease. Father John Zvezdinsky healed his son Nicholas from this disease by opening up his heart to Christ. Within the walls of the Moscow Theological Academy, Nikolai Zvezdinsky was tonsured Seraphim in memory of Saint Seraphim of Sarov, who guided him, helping him to overcome the suffering and anguish he experienced during his lifetime.

From his ancestors Nicholas Zvezdinsky inherited an unwavering faith in Christ, categorically not recognising any compromises with his conscience, and a strict, ascetic way of life (in the sense of complete forgetfulness of his own needs for the sake of service to others). He encouraged his spiritual children to be the same way. From his mother he inherited the qualities of a gentle nature—love, loyalty, faith, and suffering for Christ. He was a person who fervently loved Christ, and loved his spiritual children, whom he protected from all the works of the enemies of mankind in whatever form.

His self-sacrificing service brought him abundant gifts of grace. He was a serious spiritual father, and was so gifted in hearing confessions that unrepentant sinners and evil-doers revealed their souls to him.

He was a caring and wise Christian pastor of his flock, who was able to show sternness and mercy at the same time; and while the very foundations of life were breaking down, he was nonetheless able to separate the truth from the lie, and direct people onto the path of righteousness and justice. The archives of his time as an archpastor convince us of this. Thanks to Bishop Seraphim, the Dimitrov diocese suffered significantly less than other dioceses from the schisms of the early twentieth century.

As a young man studying at the Moscow Theological Academy, Nicholas Zvezdinsky received from God the gift of public speaking, and soon became well known for his sermons. His sermons had special qualities; they were interesting and convincing, and formed an individual connection with the conscience of each member of the audience. His words continue to draw souls to Christ, and modern day monastics are able to find the needed guidance for their spiritual life in his writings.

However, by far the greatest gift God bestowed upon Saint Seraphim was the gift of prayer. Saint Seraphim was always dedicated and fervent in prayer; he was very sincere and prayerful when serving the Divine Liturgy. He even composed prayers. The akathists and canons he wrote were obviously from the heart of a person filled with the Grace of God. They were written under extremely difficult and chaotic circumstances, and this no doubt would have required a great deal of spiritual strength. It was his cry to God and the saints. One modern-day priest, after opening his writings of repentant lamentation, felt immediately that he had found what he needed at that moment.

Finally, Bishop Seraphim also possessed the gifts of clairvoyance and healing of the sick; these gifts manifested themselves many times throughout his life.

Archimandrite Seraphim was ordained a Bishop by his Holiness Patriarch Tikhon. Patriarch Tikhon wished him well by saying; “I hope that to the people of Dimitrov you will be the same as was Saint Peter for Moscow. Follow in the path of the Apostles….were you must go on foot – on foot you will go. Never and nowhere be ashamed. Do not be afraid of discomfort, you must endure everything. It is not in vain that they cense the Bishop “three-times-three”. It’s for the many efforts and sacrifices that a Bishop is required to make and for protecting the Orthodox faith till death.”

On January 25, 1920 Vladika Seraphim arrived in the city of Dimitrov. The three years he would spend here on the Cathedra would leave an unforgettable and lasting impression upon the inhabitants of the city. Sincere and heartfelt prayer, helping youth, bringing back those who had left the church, spreading the word of God – these are just some of the services he provided to the people of Dimitrov. Like a father to all, the saint was welcoming to everyone and knew every household. Often late into the night Vladika would continue to visit his flock. “Vladika, here is a light; maybe they are waiting for us? Have we not visited all the people?” his cell attendant would ask. The people of Dimitrov would repay their Bishop with the same love. After the Services, large crowds would wait for him to emerge from the church. Upon seeing their Bishop the crowds would flock to him, and after he sat down in his carriage, they would hold onto the wheels, and mill around the carriage singing akathists and prayers, escorting him back to his residence.

By the blessing of Bishop Seraphim, a Brotherhood of the Holy Cross was established in Dimitrov, to gather those Orthodox Christians who wanted to build their lives according to the commandments of Christ.

Bishop Seraphim supported a Church surrounded by hostile anti-Orthodox factions (“Bogobortsi”—literally meaning “God-fighters”) and a godless anti-religious soviet regime. Slanderous propaganda disguised as “news” would appear in the soviet press. Headlines such as, “The Archpastor’s Appetite,” and handwritten, grammatically incorrect, nonsensical leaflets entitled “Bishop Seraphim and his treacherous initiative” were circulated in a vain attempt to discredited Bishop Seraphim’s work for the Church.

Neither the warmongering atheists nor the godless rulers could tolerate the presence of such a bishop living freely in society. Bishop Seraphim was arrested six times by the Soviet Secret police, and he remained under constant NKVD surveillance. During this period Vladika wrote many prayers, including akathists to The Lord Jesus Christ, the Bearer of the Thorns and the Cross; to Jesus Christ, the Redeemer and Saviour of sinners; and to Sweetest Jesus, During Bitter Temptations and Passions. He also wrote a canon to the Most Holy Mother of God, sung during times of despair. These prayers gave him physical strength, strength of mind, and happiness.

From his Moscow prison cell, Vladika wrote, “Blessed is God, who has thus willed. I thank Him, I glorify Him, I sing to Him, I praise Him. My soul is so filled with gratefulness to Him for this inner light, quiet joy, exultation of mind, that every day I end the Liturgy[1] with the song, ‘We praise Thee, O God’ (a prayer by St. Ambrose of Milan). Truly monasticism is a gift of inexpressible mercy and love of God for people, equal in its significance to our life. It is also the restoration of fallen mankind; as St. Theodore the Studite says, ‘Truly, monasticism is like a hammer that forges a prayerful spirit through these sufferings.[2]

The persecuted saint would pray to God from the depth of his being, and God would answer his prayers. Once while incarcerated at the infamous Lubyanka prison (NKVD headquarters) he described a dream he had. “I am not writing to you something from a book, but something that the Lord Himself granted me to experience. In a light sleep, in the Lubyanka … I entered a deep, dark underground cellar. It was dank and frightening; I was overcome by unbearable depression and despair, and a feeling of abandonment. Suddenly shone a beam of light.… I saw how it shone brighter and brighter. I saw with amazement a seat upon which Christ Himself then sat.”[3]

In 1927, while in exile in Diveevo, the Mother of God appeared to Bishop Seraphim. “I cannot describe her amazing beauty!” he exclaimed.

His faithful flock didn’t abandon their imprisoned Archpastor and loving spiritual father; they wrote letters and sent parcels to him in prison, and came to visit him. To the very end of his days Saint Seraphim continued to serve his flock. He warned people about the temptations associated with the “renovationist church” (obnovlenchestvo), and forbad a priest to serve who had betrayed Orthodoxy. He answered letters, ordained clergy, tonsured monastics, and prayed for his spiritual children.

Vladika had poor health, but he would be forced to move from place to place during his time of exile. Often he would be in extremely hard circumstances without any access to medical assistance. It was becoming clear that due to Vladika’s declining health that he would soon pass away, but God allowed his life to end in martyrdom. On the 26th of August, 1937, the NKVD (Soviet Secret Police) executed Bishop Seraphim by firing squad in the city of Omsk.

The Synod of Bishops of the Russian Orthodox Church canonised Bishop Seraphim (Zvezdinsky) as a hieromartyr in the year 2000.

Information about Saint Seraphim was collected from the book, You All Are in my Heart, the second edition of which was published in 2007. This publication contained memoirs of his contemporaries, documents from government archives, archives from the Russian Federal Security Service, Church Historical archives of Saint Tikhon’s Orthodox University, and information from the private archives of the Bishop’s cell attendant, Schemanun Joanna (Patrikeeva), who accompanied the saint throughout his many years of exile.

Translated from the Russian by Simeon Boikov for Pravoslavie.ru

[1] Bishop Seraphim served the Liturgy secretly in his prison cell.

[2] From a letter to Schema Abbess Famara (Mardzhanova)

A Pastoral Letter of New Priest-Martyr Sergei Mechev
Written to his flock after the closing of their parish church of St. Nicholas the Wonderworker on Maroseika Street in Moscow
New Martyr Priest Sergei Mechev
Let us enter, beloved ones, into the cells of our souls, into the temple of our spirit, consecrated unto the Lord at the moment of our Baptism and sanctified by Him at the time of our first Communion. This temple of ours—no one can ever destroy it, except we ourselves. In it there is both priest and penitent.
×