“The truth, even if bitter, will triumph with time” 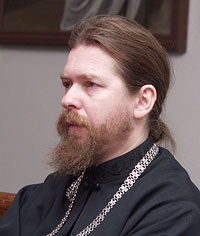 “How can peoples having the same Christian Faith be on opposite sides of the battle line? Do the heads of the Orthodox Churches have the right to take a stand against the rulers of their national government? Can the Church make a mistake? Can an illiterate person be a good and responsible Christian? Has holiness become the exception rather than the norm?” These and other questions were answered by the head of Moscow’s Sretensky Monastery, Archimandrite Tikhon (Shevkunov).

- Father Tikhon, the Georgian Orthodox Church publically supported the bringing of Georgian troops into South Ossetia and the political policy of Mikhail Saakashvili for the “restoration of Georgia’s territorial integrity”. For many people in Russia, this came as a surprise. But could the Georgian Church do otherwise? Do the local national Churches always come forward on the side of their government in armed conflicts?

Regarding the current situation in the Caucasus, it is a great sorrow to see unscrupulous politicians who ruthlessly and brutally manipulate an Orthodox people.

- With politicians it is no surprise. But how can one understand the stand of the Georgian Church? People are accustomed to hearing: “The Church cannot make a mistake.” Or are there exceptions?

- Individual people, including the highest hierarchs of the Church, can make mistakes; and history now and then tells us about these sorrowful mistakes. Today, we in Russia may not agree with the announcements of the head of the Georgian Church or with his evaluation of the situation in this conflict. And of course we understand the conditions he is in, the one-sided nature of the information in the Georgian mass media, the unprecedented heat of the nationalistic-patriotic rhetoric, and the inferiority complex which cannot help but be present in a country which is paying for the doomed escapade of its leaders. However, we expect that the truth, even if bitter, will prevail with time. I am convinced that the relations between our Orthodox peoples will soon come to the correct Christian path--the potential is great for solidarity in our relationship.

- Has it often happened in the history of Orthodoxy that the leaders of the Church have bent under pressure from the authorities?

- Has it often happened that a commander in war has ordered a retreat in order to save his army and country? This is called strategy. But there is another reaction to external pressure: betrayal. This consists in betrayal of the Faith—it is a completely different matter. In Russian history, I can recall only one head of the Church, Metropolitan Isidor, who besmirched his name by betrayal of the Faith. He was driven from Russia.

- The current aggravation of relations between countries of the West and Russia—is it from a difference of world views or is it an element of short-lived political and economic competition?

- In very many ways, it is a collision of worldviews. The saying, “West is West, East is East, and never the twain shall meet” was made by a man not from Russia or the East, but by a defender of Western civilization and the Western imperial view. This is a particular perception the West has of Russia and the whole Orthodox East.

- But Orthodox countries such as Bulgaria and Greece have joined NATO….

- In World War I, for example, Bulgaria was not on the side of Orthodox Russia. And it was the same during World War II. This is so, although it was only a few decades before World War I that Russian troops won freedom and political independence for Bulgaria at tremendous sacrifice of their own lives. What can one say?... In Orthodox families it sometimes happens that close relatives behave in an unchristian way. But this is not the norm; it’s simply a picture of our fallen world.

- Father Tikhon, debate over your film about Byzantium has not died down. On the eve of the “Teffi” television awards, TV critics expressed disapproval of this film. But as I see it, the discussions often fell to historical nitpicking and analysis of political associations. If you will permit me, I’d prefer a topic that seems to me more important: the relation of Church and State in Byzantium. Protopriest Alexander Schmemann in his book “The Historical Road Of Orthodoxy” remarks that in the Byzantine era, the Church, having entered into alliance with the government, became popular with the masses. But her “quality”, so to speak, changed for the worse. Holiness, as the norm of life in the early Christian, apostolic communities, became something of an exception in Byzantium. Did the Church act properly in making concessions to human weaknesses?

- Father Alexander Schmemann’s negative attitude toward symphonia[1] is simply his personal opinion. Many great fathers of the Church have made a completely different appraisal of the symphonia between Church and state. In symphonia, of course, there are both negative, and important positive aspects. Between the Orthodox government and the Orthodox Church there was co-operation and concerted creative work. Sometimes at a cost, of course. Does it happen otherwise? Symphonia can be ridiculed, but we can also see its unquestionable merits.

Of course, the early Christians led a special life. But to say that holiness then was the norm, is possible only in the sense that holiness for the Church is the norm for all times. One shouldn’t idealize this or that historical period, even the period of the early Christian communities. For a more down-to-earth view of that period, it is enough to reread the New Testament Epistles and the book of Revelation.

- You spoke about the great need for books to be written for people who are baptized but uninstructed. But aren't such people an anomaly?

- People who are baptized but who have not entered into the life of the Church are one of our biggest difficulties. But I wouldn’t want to judge hastily about this, or infer, as is often now done, that uncatechised people are inferior Christians, or are even not Christians at all.

Recently I happened to be in Bulgaria, and I heard there a story from the 18th century. One day some Turks came to a certain Bulgarian village. They took up residence with a large family of Bulgarians. It was Good Friday. For the Turks, the Bulgarians prepared the accustomed Turkish food, but the Orthodox family would not eat meat. “Why?” Those uneducated Bulgarian peasants couldn’t explain. They were only able to tell the Turks, “When they celebrate in Church the Resurrection of Christ and bless our decorated eggs, then we will eat meat.” This did not please the Turks. They tried to get the Bulgarians to eat meat under torture, but they refused. The men were killed the next day. Two of their wives were shut up in prison, where they were kept for a full ten years. After this time was up, the women were summoned again and ordered to eat meat during a fast. One woman broke and converted to Islam. The second woman refused. She remained a Christian, and they killed her.

What is the point here? Is it concern for ritual convention or is it a genuine relationship with God? From the point of view of some people (not only atheists but also some educated Christians), this is the irrational zeal of the semi-literate, not understanding the true values behind human life. For others, this is the podvig[2] of true Christians, not denying Christ or their Faith even under torture. Because the question here, or course, is not about meat.

I would not be too dramatic about the situation with uncatechized people. Of course, thank God, much is being done, including by our monastery, by our publishing department, to instruct people in the Faith. And this is essential. But if you only knew how many people I have met who are uneducated in religious concepts, who have not taken dilettantish catechetical classes, but sincerely love God, know Him, and are faithful to Him! It is such people that God seeks.

- Father Tikhon, some priests are saying that the hurricane and the financial crisis in America are divine punishment for its actions against Russia. This topic is being discussed so keenly that I can’t help asking you the question: Is it really divine punishment?

- To be truthful, I am more interested in whether we are pondering over the causes of our own crises and disasters. That would be more useful and important than pondering over what is happening in places like Honduras, or America.

symphonia: the cooperation or harmony or "synergy" between Church and State. The emperor is to be protector of the Church and preserver of the unity of the Faith; the government is responsible for enacting laws founded on Christian principles and for formulating policies conducive for the Church to help the citizens work out their salvation. The Church is responsible for the spiritual realm (pastoring its flock, etc).

podvig: a feat or deed of courage, of asceticism, of Faith. The Chapel that kept the Mozdok Icon of the Mother of God desecrated in Ossetia
On Friday, in the Kurtatin Gorge, unidentified people desecrated the Chapel of the Nativity of the Mother of God. The vandals carried out Icons from one of the most ancient Chapels that is situated in three kilometres from the Alansky Dormition Monastery. Pain and hope in ancient Orthodox Ossetia.
An interview with Hieromonk Nicodim (Bekenev)
Today South Ossetia is a fertile field for pastoral work. Most of the people who live there consider themselves Orthodox, and feel linked with Russia not just politically, but more importantly, spiritually. The gap which formed in Church life under the soviet regime is now disappearing. People are going to church, and there is a great thirst for the word of God. The holy fathers say that the most important conditions for salvation are memory of death and fear of God—and that is what people who live there have.
×