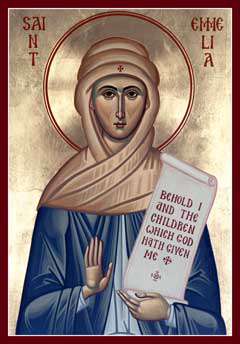 St Basil the Great’s mother St Emilia was the daughter of a martyr. On the Greek calendar, she is commemorated on May 30. St Basil’s father was also named Basil. He was a lawyer and renowned rhetorician, and lived at Caesarea.

Ten children were born to the elder Basil and Emilia: five sons and five daughters. Five of them were later numbered among the saints: Basil the Great; Macrina (July 19) was an exemplar of ascetic life, and exerted strong influence on the life and character of St Basil; Gregory, afterwards Bishop of Nyssa (January 10); Peter, Bishop of Sebaste (January 9); and Theosebia, a deaconess (January 10). Blessed Maria Ivanovna of Diveyevo
August 26/ September 8 (†1931)
No one ever heard from her any complaint, moaning, or unhappiness, nor irritability nor lamentations over human unfairness. The Lord Himself glorified her among the people for her God-pleasing life, her great humility and patience. People began to notice that what she would say or warn about would come to pass, and that those with whom she stayed would receive grace from God. St. Mary Magdalene
July 22/August 4
Particularly remarkable was the determination and unusual courage which Mary Magdalene showed toward her Saviour. At the time of His greatest suffering, while He hung on the Cross and when even His apostles had abandoned Him, Mary, Magdalene stood at the foot of the Cross together with the Mother of God and the-Lord's beloved disciple, John.
×