Hieromartyr Theogenes the Bishop of Parium on the Hellespont 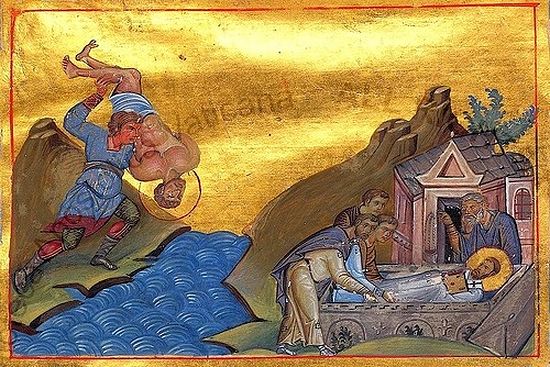 The Hieromartyr Theogenes was bishop of the Asia Minor city of Parion at the beginning of the fourth century. During the reign of the emperor Licinius (311-324), a coruler with Constantine the Great, the tribune Zalinkinthius demanded that he give up the priesthood, to renounce Christ and to enlist in military service.

When he refused, St Theogenes was mercilessly beaten with rods and thrown into prison, where he was not allowed any food. Then they sentenced him to be drowned in the sea. Before his execution, the saint requested time to pray. As he prayed, an extraordinary light shone on him. The sailors and some of the soldiers who were ordered to drown the saint were struck by the light and were converted to ChriSt Other soldiers hastened to cast him into the sea.

St Theogenes received the unfading crown of martyrdom around the year 320. His body was later taken from the water by Christians and buried at the city walls. At this spot, numerous healings occurred. Hieromartyr Hermogenes the Patriarch of Moscow and Wonderworker of All Russia
Commemorated May 12/25, February 17/March 2

Hieromartyr Hermogenes the Patriarch of Moscow and Wonderworker of All Russia
Commemorated May 12/25, February 17/March 2
On Bright Monday in 1611, the Russian militia approached Moscow and began the seige of the Kremlin, which continued for several months. Besieged within the Kremlin, the Poles often sent messengers to the Patriarch with the demand that he order the Russian militia to leave the city, threatening him with execution if he refused. The saint firmly replied, "What are your threats to me? I fear only God. If all our enemies leave Moscow, I shall bless the Russian militia to withdraw from Moscow; but if you remain here, I shall bless all to stand against you and to die for the Orthodox Faith." Hieromartyr Sabbas (Trlaich), Bishop of Gornji Karlovac
Hierodeacon Ignatius (Shestakov)
The bishop and the priests were told that they were undesirables and that they must abandon their flocks. The Roman Catholic Archbishop of Zagreb, Aloysius Stepinac, openly told Vladyka that he must leave ‘Croatian’ Karlovac, otherwise he would be liquidated. Vladyka answered him: ‘Even if it costs me my head, I will not abandon my people!’ Soon it became clear that the Catholic Archbishop was not joking. Vladyka Sabbas was arrested and horribly tortured. During the tortures and beatings in Plashkom, the Ustashi used a gramophone to play the hymn, ‘As many as have been baptized in Christ, have put on Christ’.
×