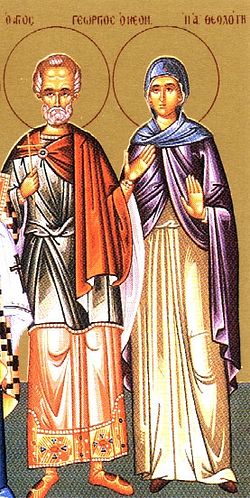 St George (Zorzes) was from Georgia, and was sold into slavery when he was young. His master, a Muslim from the Greek island of Mytilene, forced him to embrace Islam and renamed him Sali. After his master died, George remained on the island and opened a small shop.

In 1770, when he was seventy years old, he appeared before the authorities and announced that he was an Orthodox Christian. The kadi thought that George had lost his mind, since his declaration would lead to his death.

The next day George was questioned again, and then he was beaten. He endured his torments with silence, but would not be turned from his confession of faith. After more torture, the holy martyr was hanged on January 2, 1770, receiving a crown of glory from the Savior Christ. American, Georgian chaplains celebrate Nativity in Afghanistan
Archpriest Jerome Cwiklinski, US Navy Chaplain and a priest of the Orthodox Church in America, and an Orthodox chaplain from the Republic of Georgia, concelebrated the Divine Liturgy for the Great Feast of the Nativity of Our Lord for military personnel here on January 7, 2011.

Georgian Patriarch: 'Refrain from Sending Kids Abroad for Education'
The influential head of the Georgian Orthodox Church, Patriarch Ilia II, called on believers on October 3 not to send thier children abroad for education purposes, saying that "in most of the cases it will harm a child."