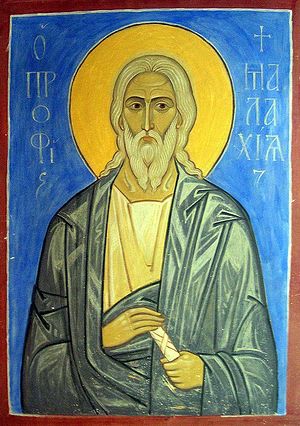 The Holy Prophet Malachi lived 400 years before the Birth of Christ, at the time of the return of the Jews from the Babylonian Captivity. Malachi was the last of the Old Testament prophets, therefore the holy Fathers call him “the seal of the prophets.”

Manifesting himself an image of spiritual goodness and piety, he astounded the nation and was called Malachi, i.e., an angel. His prophetic book is included in the Canon of the Old Testament. In it he upbraids the Jews, foretelling the coming of Jesus Christ and His Forerunner, and also the Last Judgment (Mal 3:1-5; 4:1-6).

We celebrate the memory / of Your prophet Malachi, O Lord; / through him we beseech You: / “Save our souls.”

Podoben: “Today You have shown forth...” / Endowed with the gift of prophecy, O Malachi, / you clearly proclaimed the saving coming of Christ to the world. / His brightness has brought light to the whole universe.