Within the framework of the all-Russian national celebrations marking the 1000th anniversary of repose of Holy Prince Vladimir of Kiev, the Baptizer of Russia, and with the blessing of His Holiness Patriarch Kirill of Moscow and All Russia the reliquary with relics of Prince Vladimir, Equal-to-the-Apostles, will be brought to cities and towns of Russia and Belarus for veneration by the faithful. 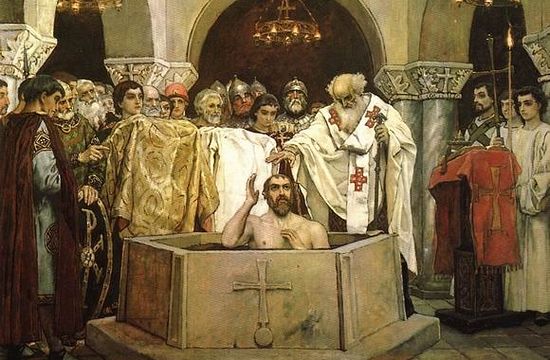 Between May 27 and December 1, 2015, residents of 45 cities of Russia (including remote northern regions) and 5 cities of Belarus will be able to venerate the relics. Bringing of the relics is organized on the Russian Orthodox Church’s initiative and with support from the St. Basil the Great Charitable Foundation, reports the Synodal Information Department.

Prince Vladimir (d. 1015, feast: July 28) is one of the most venerated saints in the Orthodox Church. The role of his personality in the present-day Russia is really crucial. Not only was the holy prince the pioneer of Christianity in Kievan Russia (Rus’), but he also was the embodiment of an ideal and wise ruler.

The visit of St. Vladimir’s relics to many cities of Russia and Belarus is timed to coincide with the 1000th anniversary of his repose, widely celebrated this year. It is the first large-scale event of this kind since the uncovering of the Grand Prince’s relics back in the 17th century.

Prince Vladimir was buried on July 15, 1015, in a marble sarcophagus inside the Church of the Tithes (of Dormition of the Mother of God) in Kiev. Later the Mongols destroyed the original church, and the sarcophagus with relics of the holy prince remained for a long time under the ruins, until in 1635, by order of Metropolitan Peter (Mohyla) of Kiev and Halych (1596-1646, now venerated as a saint by some Local Orthodox Churches), the area was cleared and the sarcophagus discovered. Then a portion of the relics of St. Vladimir was sent to Moscow, to Tsar Mikhail Fyodorovich Romanov (who reigned from 1613 till 1645), and they remained at the Moscow Kremlin’s Dormition Cathedral. In the Soviet era and until recently the relics were kept in the Moscow Kremlin museum treasuries.

In 2010, the relics in the original reliquary were solemnly given to the Russian Orthodox Church by the President of Russia and placed inside the Patriarchal Cathedral of Christ the Savior in Moscow. Since then the relics have rested there, available for veneration only by Muscovites and visitors to the capital.

The upcoming unprecedented action will enable thousands of Russian residents throughout the country, as well as residents of Belarus, to see this great saint’s relics. It will begin on May 27 in Tula and finish on December 1 in Kaliningrad.

Press service of the St. Basil the Great Charitable Foundation: V. Legoida: “1000th anniversary of repose of Prince Vladimir should change many people’s lives”
“The path of a Christian is the path from a beast to a human being – a creature who throughout his or her life experiences all the burdens of the fall in his or her personality and deeds. Our chief task is to succeed in becoming men in the time that God has given us (and we do not know how much is left),” the Church representative stressed.

On the Spiritual Progenitor of the People of Rus’
Archpriest Artemy Vladimirov , Archimandrite Alypy (Svetlichny)
Today’s people, who have resigned themselves to the name, “consumer” and “average person”, cannot even imagine what Prince Vladimir’s heart lived by when he was in his phase of a torturous search for faith, desiring to find some meaning for his life, and he sought out spiritual teachers to follow.
×