A very unpleasant rhetoric is being propounded by some Catholic writers against the Russian Orthodox Church as supposedly something of an agent of President Putin, who, according to the same rhetoric, is a monster beyond all description. It is blown so largely out of proportion that it could even be ignored by sober people, if there weren’t such overt pressure (one could say, bullying) being applied not only to force other Catholics to think the same way, but also to get an entire Patriarchate to “shape up” and act more like Catholics. The call for “dialogue” sounds more like a command to “listen to my monologue—and don’t dare make any excuses for your reprehensible behavior by citing facts or explaining nuances.”

Happily, three Orthodox writers have published an open letter to the most vocal and persistent of these Catholic writers, George Weigel, a distinguished lay Roman Catholic theologian and author of the magisterial Witness to Hope: The Biography of John Paul II (Harper Perennial: 2004 [updated edition]. 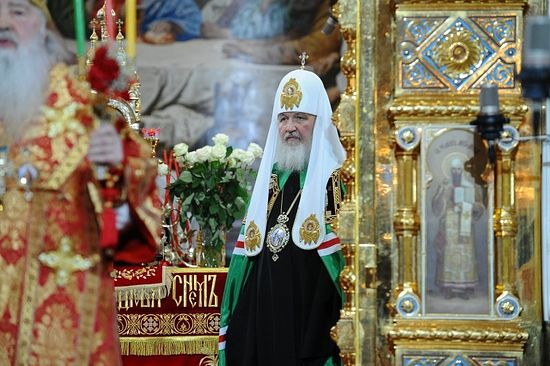 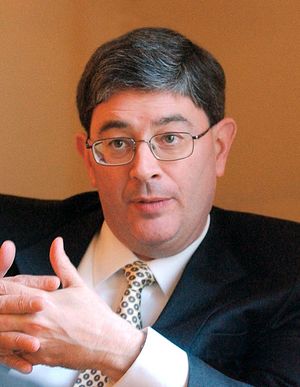 George Weigel
As longtime friendly colleagues in the pursuit of a faithful Christian public moral witness in America, we are profoundly saddened and shocked at your unfounded, insulting accusations against the moral integrity of the senior leaders of the Russian Orthodox Church since the Ukrainian crisis erupted in February 2014.

The initial broadside appeared in your column in the Denver Catholic Register on March 18, 2014, when you dismissed Patriarch Kirill of Moscow as "duplicitous" and Metropolitan Hilarion (Alfayev), chairman of the Department of External Church Relations of the Moscow Patriarchate, as "mendacious.” We take increased umbrage at the steady escalation of your Szechuan ad hominem prose since then:

The condescending, hubristic tone of those comments is surpassed in offensiveness only by your resort to uncharitable epithets—liars, mouthpieces, and dupes—which hardly constitute a reasoned argument. It is well-nigh impossible in this “open letter” to defend Patriarch Kirill and Metropolitan Hilarion from your omniscient pretense to know their hearts and minds. However, we shall attempt here to set the record straight by accurately citing and explaining their public positions on the Ukrainian crisis. 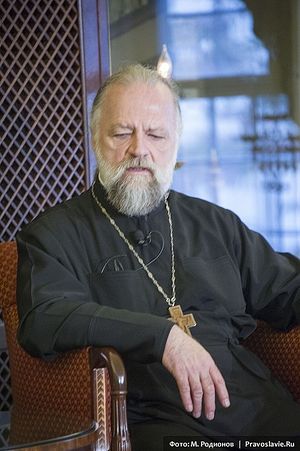 Archpriest Victor Potapov
Far from a throwback to Soviet-era practices—as you have suggested, both in your own words and though uncritical quotation of the Ukrainian Greek Catholic Church’s (UGCC) Major-Archbishop Sviatoslav Shevchuk (“Ukraine Rising,” National Review, Nov. 10, 2014), the close cooperation between Church and state in Russia today is more reminiscent of the pre-1917 symphonia, the Orthodox standard throughout our history since the time of Byzantine Emperor Theodosios I in the late fourth century. That organic instead of adversarial understanding of the sacerdotium and the imperium united, harmoniously albeit with some tension, in a single Christian commonwealth is obviously antithetical to the neo-Jeffersonian principle of strict “separation” of church and state, now political dogma in virtually all Western countries imbued with the notion of secular liberal democracy.

In the restored symbiosis in post-Soviet Russia it is hardly clear that the Church is the junior partner dutifully “amplifying” state policy. To the contrary, as Professor Nicolai N. Petro of the University of Rhode Island pointed out (“Russia’s Orthodox Soft Power,” Carnegie Council for Ethics in International Affairs, March 23, 2015), Kremlin policies “are popular precisely because they have the blessing of the Russian Orthodox Church.” Grounded in a religio-cultural vision of Russky mir—the “Russian World” descended from ancient Kievan Rus’ and embracing the people in Russia, Ukraine, Belarus, and perhaps Kazakhstan—the balance in the contemporary Russian neo-symphonia, as it were, depends on the respective priorities of Patriarch Kirill and the Putin government. As Petro astutely observed, Russky mir is, for the state, “a political or a cultural concept” by which the Russian Orthodox Church “can be a useful tool” for Russia’s domestic and international advancement. But Russky mir is, for the Church, “a religious concept” by which the national governments can be “tools” for the “second Christianization” of the historic lands of Kievan Rus.’ 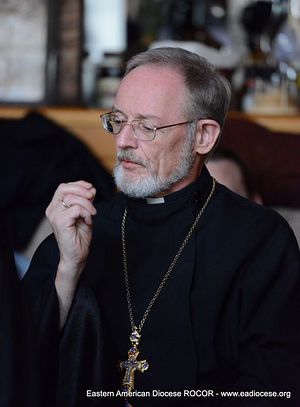 Archpriest Alexander F. C. Webster
We would argue that, since AD 2000, the Russian neo-symphonia has begun to tip in favor of the Church, not the state, and praise God the Holy Trinity for that! The comprehensive document titled, Bases of the Social Concept of the Russian Orthodox Church, produced by the Department for External Church Relations of the Moscow Patriarchate under the leadership of Metropolitan Hilarion (Alfayev)—whose moral character you have besmirched—is the gold standard of contemporary, yet very traditional, Orthodox social ethics. Other ecclesial initiatives have provided the main impetus for recent Russian laws—decried, alas, by Western liberals—to curb propagandizing and proselytizing of young Russians by “gay rights” advocates, reduce the enormity of abortions in post-Soviet Russia, and protect the sanctity of religious temples from unwanted intrusions by miscreant groups like “Pussy Riot.” In addition, the Russian Church has established a profound inter-confessional collaboration with U.S. evangelicals to promote strong families and traditional marriage between one man and one woman alone.

None of those accomplishments was possible throughout most of the twentieth century. As each of the co-authors of this open letter have acknowledged often in print, Russian Orthodoxy had to endure the godless Soviets for 74 years, including the shameless betrayal of faithful confessors and martyrs by Orthodox hierarchical collaborators with that regime. For you to compare that horrific era to the miraculous re-emergence and moral integrity of the Church since 1991 is a shameless libel.

Whatever criticisms one might have of the symphonia model, blanket condemnation is hardly appropriate as we witness the trend in our own country, where Christianity is increasingly marginalized, moral vices are officially promoted as virtues, and abortion “rights” and homosexual “rights,” in particular, are now key components of U.S. foreign policy—a trend we are sure you deplore no less than we.

III. The Russian Church—a Rival, Not an “Enemy”

Patriarch Kirill, Metropolitan Hilarion, and other prelates of the Russian Orthodox Church have been consistent on two points with respect to Ukraine. First, they voice support for Russia’s policies. Second, they call for restraint in what they see as a deplorable, fratricidal conflict, which pits the Russky Mir against itself. 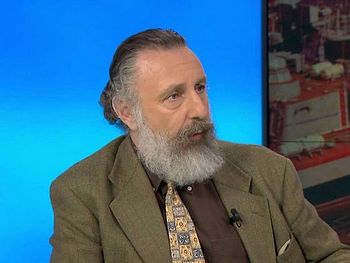 James George Jatras
You need not accept their point of view. Perhaps based on your own religious heritage, you may prefer to believe that the UGCC is “a safe-deposit box of Ukrainian national culture and identity,” despite the mere 15%, at most, of Ukraine’s population who identify as Catholics (Latin or Eastern rite). Underlying the current conflict are some sharp as yet unanswered questions: What exactly is Ukraine (“Borderland”) and who are Ukrainians? Are they an aspiring part of (an increasingly godless and libertine) “Europe” defined in Brussels or an integral part of the Russky Mir? Who was on the “right” or “wrong” side of World War II? Ukrainians themselves are at odds on these questions, largely along regional and confessional lines.

When Ukraine became an independent republic in 1991, those questions lay dormant under a deceptively calm surface. But they remained a fatal weakness in the very fiber of the new state, along with an unbelievable level of oligarchic corruption. The unconstitutional unseating of the flawed but democratically elected government in February 2014 shattered what was already a fragile unity. That, not some mythical Russian aggression, has torn Ukraine apart.

Worse, the overturn of the legal government would not have succeeded without violence or the participation of extreme nationalist elements. You write that Ukraine “rose up against post-Communist corruption and stagnation,” and that Archbishop Shevchuk’s “Church played a central role in the Maidan Revolution of Dignity,’ its bishops and priests dodging Russian bullets to tend to those demonstrating nonviolently for freedom and justice.” However: 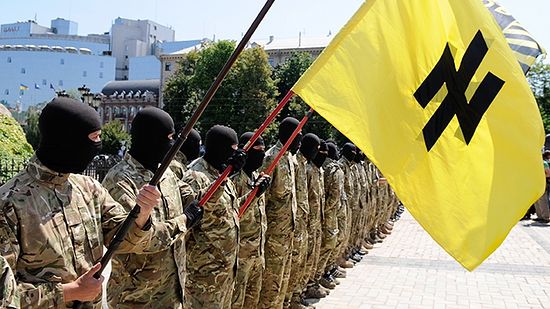 Your trumpeting of a single Ukrainian national will may fit in well with a “good vs. evil” Manichaean narrative to depict the Ukraine conflict as one of West vs. East, democracy vs. tyranny, Ukraine vs. Russia, and, by implication, Catholic vs. Orthodox. It may be great fare for readers of the Denver Catholic Register, National Review, and other publications who may be unaware of past and present complexities. But it is not conducive to a peaceful and just resolution of the Ukraine crisis or averting an even broader conflict that would imperil Europe and the world, including the U.S. Nor is it an excuse to hurl verbal Molotov cocktails at honorable Christian pastors who happen to disagree with you.