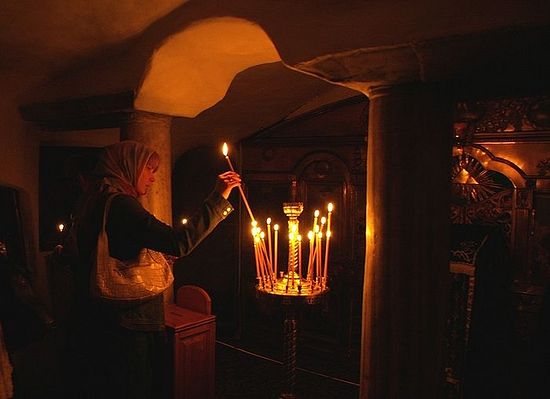 In the caves of the Kiev Caves Lavra

Time flows differently when you leave the hospital having been diagnosed with cervical cancer, knowing that there is no money for the treatment, and that you cannot tell your relatives about it. From that moment, every day you live becomes priceless. And that was exactly what happened to Nina, age thirty-eight, for whom the doctor at the hospital in Krasny Khutor (Kiev, Darnitsky district) had prescribed surgery to remove her tumor. She could not tell her mother about her disease because the latter suffered from high blood pressure and had been stricken by her husband’s death shortly before. And neither could she tell this to her sister, who was in the eighth month of her pregnancy. 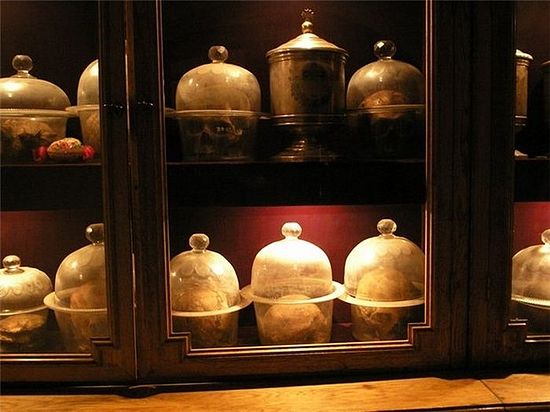 After the prayer service, a woman appeared near Nina and recommended she have another medical check-up. So Nina went to a regional hospital on Lomonosov Street and it was there that she was urged to try a non-operative treatment. Nina told her relatives that she only had a mild inflammation but needed to get some treatment. She shared her trouble with only one person—a priest who was the father of her godchild. The woman asked for his advice, what she should do in that situation, and the priest brought her an Akathist to St. Theodosius, Archbishop of Chernigov, and blessed her to read it. She had never read any Akathists before and did not even know how to do it. So, Nina read this Akathist for more than a year.

Parishioners of the Lavra who knew Nina asked the priests and monks with whom they were familiar to pray for her. Nina spent every Tuesday and Thursday in the Lavra, even when she felt very sick—especially after the radiation therapy. After the prayer services her condition each time returned to normal, she began to feel better, and once even managed to venerate the relics of Venerable Agapit of the Kiev Caves.

Before her illness Nina had been a non-believer, though she liked to stand in the church on great feasts. She felt joy in her heart simply from being inside church. But she felt it was difficult to stand during services at the Kiev Caves Lavra, while in other churches it was easier, warmer and lighter.

Once Nina asked this question to a priest, who replied, “Have you ever thought about how people usually go to the monastery with their troubles and miseries, when they feel very bad? This is when they come to God; that is why it is so hard to stand at a service.” “Now I realize that it is true—they prayed for my life at the monastery, and their prayer was fulfilled. When I first heard my diagnosis, it was no longer difficult for me to stand at services, and I even began to feel well,” recalls Nina, laughing.

But the woman did not have enough money for the proposed treatment. Her income was so modest that it was not enough to pay for even one procedure, one cauterization. At that time, Nina’s former boss, a woman, was away and asked Nina to help her with dividends, to keep an eye on her money. Having learned about Nina’s diagnosis, the boss told her to take the money, as much money as was needed for her treatment. “Thus the Lord sent me that illness and sent the money to cure the illness,” says Nina. 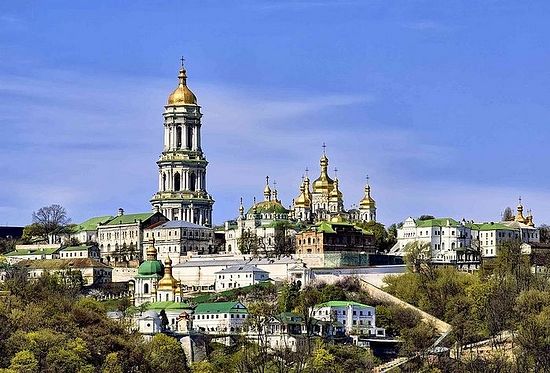 Even when Nina wanted to give some money to her doctor, following the recommendations of other patients, the woman gynecologist said: “Don’t do that—we don’t have that sort of relationship with you.” To set up an intravenous drip a nurse expected to be paid, yet Nina was told only to buy the intravenous delivery system instead of a drip. It also turned out that the medicine that had been prescribed to Nina was available in the hospital department, so she did not have to buy it—they gave her all she needed. “And people often have to spend tremendous sums of money for their treatment,” says Nina, shaking her head.

Nina’s course of treatment did not last so long in comparison with other patients—only four and a half months. She underwent X-ray therapy throughout the course and chemotherapy on the final week.

These treatments are extremely painful. Some women fainted from pain, which was so severe, as if a piece of flesh was being torn off one's body. “I believe that I withstood all this only through the prayers of the Holy Fathers of the Kiev Caves Lavra and because I attended the prayer services to Venerable Agapit in the Near Caves and before the myrrh-streaming relics in the Far Caves of the Lavra,” she testifies. 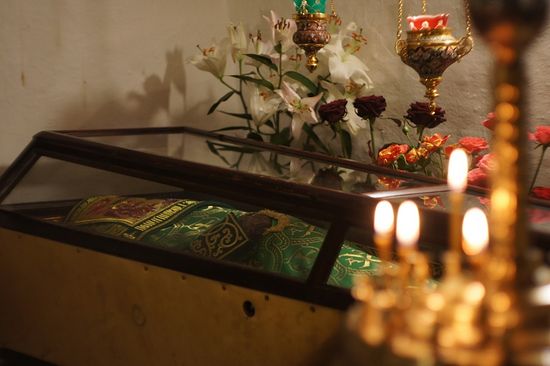 In the caves of the Kiev Caves Lavra

The monastic prayers at the Lavra made Nina’s treatment easier and gave her strength and patience to bear the pain. The doctor later said to her: “We wish all of our patients were as patient as you.” Nina concealed the truth from her relatives and they thought that she was merely having some procedures.

Radiation therapy causes a low white blood cell count (when blood needs to renew its red cells). Younger women patients were very thin with swelling in their cheeks. Nina could not understand what was happening to them. But then she learned that the reason was hormones. So they underwent hormone therapy in order to get the white blood cells count back to normal. As for Nina, her white blood cell count went down only on the final day of her treatment! She credits only the Lavra and the prayers of monks with this miracle.

Of all the patients, only Nina went to the Kiev Caves twice a week, and her recovery went easier. Some of the patients did not endure the treatment and were discharged from the hospital, returning home for rest. But soon they would return to the hospital, and those of them who had stayed at home a long time had to go through it all over again. Nina called other patients to join her in her visits to the Kiev Caves Lavra, but nobody went to the Lavra as often as she did.

Once, the relics of Greatmartyr and Healer Panteleimon were brought to the Lavra. One woman who had just had surgery and one young lady with a serious disability came with Nina to the relics. It was summer and a heat wave, and so Nina feared that one of her companions might feel unwell. Nevertheless, all of them queued more than three hours and venerated the holy icon, and neither of the two felt sick. But, unfortunately, the disabled lady later died. She could not stand the painful therapy at the hospital and resorted to the help of alternative medicine, which often has harmful effects on health. Even the doctor of their hospital department said that alternative methods would not help, and that she needed to stay at the hospital. But she left the hospital. Sadly, it is not rare when patients refuse their treatment at a hospital. In reality no “healers” help sick people; all we need is to rely fully upon God, to go to church, and trust real doctors.

After her illness, Nina began to take Communion. She was given the status of “group three” disability, and this was her status for two years.

At the Kiev Caves Lavra Nina met pious Orthodox Christians who helped her come to better understand the faith, the meaning of our life on earth, and to realize that our souls are eternal. They gave her spiritual literature to read. Thus she familiarized herself with Divine Liturgy.

After taking Communion her state of health always improved.

However, Nina’s illness badly affected her thyroid gland. The woman lost twelve kilos. But when Nina attended prayer services, she would get better after being anointed with holy oil. For some time Nina took hormones (hormonal agents) for her thyroid gland, then had her tests done—and the results were good! Then she had an echocardiogram. A 16-year-old girl and a 14-year-old boy had their heart ultrasound together with her. Nina’s results were very good in comparison with these two patients. And this was after the huge course of medicines and drugs she had taken! The doctor was surprised, because after these drugs there are usually changes in the myocardium.

Now she has no more problems with her thyroid gland and she no longer takes hormones. 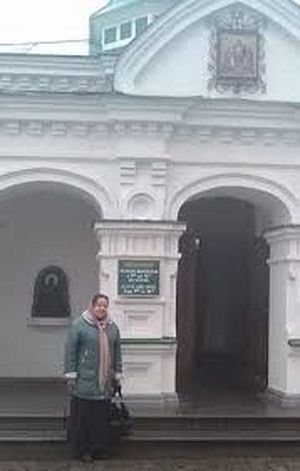 It was only three years later that Nina told her relatives the truth about her illness—and they did not believe her. After her discharge from the hospital Nina continued to go for check-ups: first every half a year, then once a year, and last time she was told to come again only in 2-3 years. It means that the woman is absolutely healthy now. At the present time she has no problems with her health at all, and her disability status was removed on the third year after the illness. The doctor was totally amazed that Nina had made a full recovery. And the priest, the father of Nina’s godchild mentioned above, said that she had been cured through the intercession of St. Theodosius of Chernigov and the prayers of the Lavra clergy.

“I think the Lord led me to salvation in this unique way, even through that illness. And He guides each of us, but we often do not notice it,” she says. A Miracle on Christmas Eve
Maria Saradzhishvili
When Christmas Eve comes, how we wish for a miracle! And miracles really do happen. These two stories were found for us by Maria Saradzhishvili on the pages of a Georgian periodical. They are not only miraculous examples of God’s Providence in life, but portray the hearts of people filled with great nobility, self-sacrifice, and love. And of course, faith in God.

Miraculous Help from St. John of Kronstadt Today
Olga Rozhneva
My heart froze. I asked her myself how my son is. The doctor answered, “Mama, there must have been some mistake with your son. It can’t be explained any other way.
×