Patriarchate of Bulgaria: On the Pan-Orthodox Synod and the Appearance of Heresy as a Gift from God so that Orthodoxy can be proclaimed. 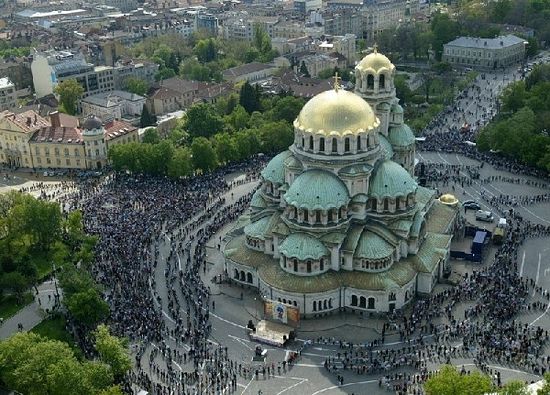 The Church of Christ is not of this world but is founded by the Holy Trinity so that she might serve in the world; that she may be penetrated with the truth of Christ, that she may sanctify and lead one back again to God. In this sense, the Church coexists with all phenomena in different epochs of human history, including also that of the pluralism of opinion, one of the characteristic scars of the time in which we live. This pluralism, however, is not inherent in the Orthodox faith and in its dogmatics, just as diversity of opinion is not intrinsic to God, in Whom there is no variableness nor shadow of turning (James 1:17).

Certainly, the Holy Orthodox Church does not deny freedom of human thought, but attempts to direct this freedom in a salvific direction. This way, in connection with confirmed and true Church teaching, many personal theological opinions arise—for example, the teaching of St. Gregory of Nyssa on the "garments of skin," the interpretation of St. Filaret (Drozdov) on the petition "For the peace of the whole world, the well-being of the Holy Churches of God and the union of all," the position of Fr. Sergey Bulgakov on the "feminine principle" ("Sofia") in God. Over time, mass heretical communities are also appearing and are frequently privileged through political protection. But this cannot, in some way, weaken or violate the holiness of the Church and her uniqueness, neither can it deny her creed, her sacred tradition, and her holy scripture.

Today the entire Orthodox world is excited about the upcoming Holy and Great Council, which is planned for June 2016 on the island of Crete. Various expectations and positions, apprehensions and hopes, are being expressed.

Right now the community of the Church is exchanging and discussing a host of letters, petitions, documents, and epistles. Everyone is expressing his view in accord with his internal feelings. But in as much as no person is infallible, and in as much as none of us is more great or wiser than the teachings of the Church that have been confirmed in the Ecumenical Councils throughout the centuries, personal bias should give priority to the true, eternal, ubiquitous, and unanimous confession of the Orthodox faith.

This is essential for all of us in as much as it is not theoretical theology, theological "diplomacy," or the cultural and social activity in the Church that are the means for the eternal salvation of our souls, but our trueness before God, humility, faithful love, and life in His Spirit and His truth, in Him Himself, Who is absolute Truth. It is not possible for any of our particular, variable, and self-servingly adjustable "truths" to save our lives.

It has always been a gift of grace for the Church when heresies appear and intensify, in as much as she has thereupon formulated and reconfirmed the pure teachings of holy Orthodoxy. Such is the case today—different heresies and sects, including the heresy of ecumenism, allow the Church to express its unchanged and principled position through its archpastors, pastors, theologians, and laity, which is just as beneficial for us, Orthodox, as it is for the non-Orthodox.

At the moment, revived Orthodox discussion is flowing freely about the nature of the Church and about what should be her relationship to other Christians—Roman Catholics and Protestants. The Georgian Orthodox Church under Patriarch Ilia II, metropolitans such as Athanasy of Limassol, Hierotheos (Vlahos) of Nafpaktos, and Seraphim of Piraeus, elders of the Holy Mountain such as Sava (from the Great Lavra) and Gabriel (from Koutloumousiou Monastery), professor and priest Theodore Zisis, professor Dimitrios Tselengidis, as well as many others, have over the past few months shared their position publicly, according to established patristic teaching, that the Church of Christ, that is, the Orthodox Church (ecclesia), is one and only she is holy, ecumenical, and apostolic. The remaining heretical communities are referred to (sometimes in the Orthodox lexicon as well) with the term "church"/"churches," but for our part, this should be a provisional commemoration, that is, in the sense of an "assembly" (the old meaning of the Greek word ecclesia). The Orthodox Church is required to preach the truth to these communities, that it might be possible for each of them to be saved by turning to Orthodoxy.

The Bulgarian Orthodox Church is not a member of the ecumenist organization "World Council of Churches," but in as much as it is a part of universal Orthodoxy and the world in which we live, there is no way to remain on the sidelines in light of all these issues—as much on the level of its hierarchy, the Holy Synod, as on the executive level of the clergy, monastics, and laity.

In light of this, the canonization and celebrations of St. Seraphim of Sofia, the Wonderworker, which took place on February 3 and February 26, 2016 respectively, have symbolic importance for the Bulgarian Orthodox Church, in as much as this enlightener of God very accurately has pointed out the shortcomings of ecumenism and the correct relationship that we Orthodox should manifest towards the rest of the Christian world, a relationship namely of active and not sentimental love, a relationship filled with missionary concern and dogmatic integrity.

In this regard, we recommend the following article by the Bulgarian Schema-Hieromonk Dmitry Zografskiy, in which valuable and sincere citations of the Holy Fathers of the Church are proffered. In these quotations breathe the universal voice of Orthodoxy in relation to the nature of the Church and our relationship to non-Orthodox Christians.

The contemporary challenges before our Orthodox conscience are a divine gift—a gift for the clarification of our Orthodox self-awareness, for a kindling of correct confession of the faith, and for living in sacrificial love towards all our neighbors.

Dr. Desislava Panayotova is the general editor of the official site of the Bulgarian Orthodox Church

Patriarchate of the Bulgarian Orthodox Church

Archbishop Seraphim (Sobolev) has been Canonized
Metropolitan Ilarion then read the Act of the Holy Council of Bishops announcing the canonization of Archbishop Seraphim among the host of saints. The Council members then sang the exaltation to the newly-glorified saint.