The Greatest Example of Forgiveness! 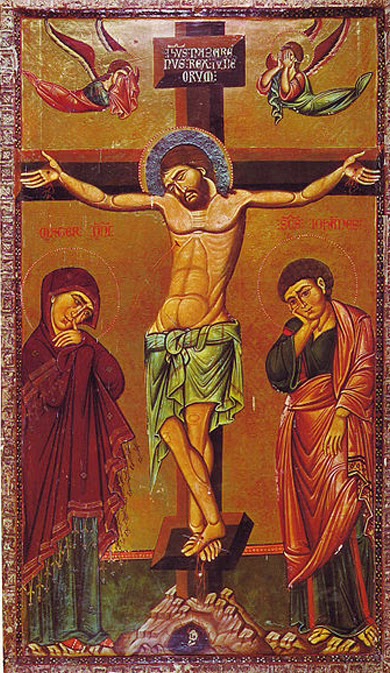 And when they came to the place which is called The Skull, there they crucified Him, and the criminals, one on the right and one on the left.  And Jesus said, “Father, forgive them; for they know not what they do.” Luke 23: 33-34 (From the Eighth Gospel of Holy Thursday Evening) Thursday of the Fifth Week of Lent

In Matthew 18: 23-35, Jesus tells us a parable about an unforgiving servant. A man owed his king more money than he could ever pay. And when he begged the king for mercy, the king forgave the entire debt. This same man, who had been forgiven for so much, then found a servant who owed him a small amount of money. When that servant asked for mercy, he refused, and put him in prison. When the king heard about this, he put the first servant in prison. The lesson of this parable, said Jesus, is that this is what “my Heavenly Father will do to every one of you if you do not forgive your brother from your heart.” (18:35)

There are MANY teachings on forgiveness offered by our Lord. In the Lord’s Prayer, we are taught to ask God to “forgive us our debts, as we also have forgiven our debtors,” (Matthew 6:12), meaning that we are to forgive in the same way we expect to be forgiven. He tells us in Matthew 6:14 “For if you forgive men their trespasses, your Heavenly Father also will forgive you; but if you do not forgive men their trespasses, neither will your Father forgive your trespasses.”  In Matthew 18:21, we read “Peter came up and said to Him, ‘Lord, how often shall my brother sin against me, and I forgive him? As many as seven times?’ Jesus said to him, ‘I do not say to you seven times, but seventy times seven.’”  That’s a lot of forgiveness!

And as He was being crucified on the cross, in the midst of pain, suffering and humiliation, Jesus asked His Father to forgive those who were killing Him! What greater example of forgiveness can there be!

“Forgiveness” and “mercy” are concepts that are closely related. When I hear the word “mercy,” I think of someone who is about to be executed, who asks to be spared, and is shown pity. “Mercy” means giving someone better than what he deserves. In the Divine Services of our church, the phrase we hear most often is “Lord, have mercy,” which means “Lord, give me the thing I don’t deserve, the thing I don’t have any right to, pity me and allow me to have it anyway.”

How many times must we forgive our neighbor? As many times as we hope God will forgive us. And to what depth of sin must we forgive? Well, Christ forgave those who were murdering Him. We certainly should be able to forgive sins that are less horrific than that.

Forgiveness does not mean one has to be friends with everyone who has wronged them. For instance, if someone were to hit my car and damage it, I can forgive them. I am not required to befriend them. But let’s use the more frequent example of forgiveness between friends, spouses and families. We all sin, and we all sin every day. Thus, we are all in need of forgiveness on a daily basis, from the Lord and from one another. If we do not learn how to forgive as we go along, we will build walls and grudges and our relationships will quickly break down on a fundamental level. If we learn how to forgive one another, we will be able to create long and lasting relationships. And we will be able to learn how to build real relationships, because every relationship has problems. Sweeping problems under the rug doesn’t make for a healthy relationship. Neither does being unable to forgive problems. Having mechanisms to confront problems and being able to effectively forgive and ask for forgiveness sets each relationship not only on a more stable path, but sets each relationship under the umbrella of Christ, and follows His example of forgiveness. The Crucifixion and Christ’s forgiveness from the Cross opened the door of reconciliation between God and humanity. It also gave us a the greatest example of how to forgive and reconcile with one another.

“Israel, My first-born son, committed two evil deeds. He forsook Me, the source of the Living water, and hewed out for himself a broken well; and he crucified Me on the Wood, and asked for the release of Barabbas. The Heavens were aghast at this, and the sun hid its rays. But you, O Israel, were not ashamed, and delivered Me to death. Forgive them, O Holy Father, for they know not what they have done.” (From the Praises of the Service of the 12 Gospels on Holy Thursday Evening, Trans. by Fr. George Papadeas) What Goes Around Comes Around
Fr. Stavros Akrotirianakis

What Goes Around Comes Around
Fr. Stavros Akrotirianakis
If we are going to live by this commandment of the Lord to forgive one another, we are going to have to bring the word “forgive” into our conversations and the concept of forgiveness into all of our relationships. Forgiving Others
One of the most distinctive teachings of the Christian faith is freely to forgive others. How do people forgive a crime like murder?
The moment when a murderer is released from prison can be a traumatic one for the victim's family. But for American Bill Pelke the release of his grandmother's killer this year was different - he has not only forgiven her, he wants to help her start a new life. How are people able to forgive a crime like this?
×