Hieromartyr Theodotus the Bishop of Ancyra 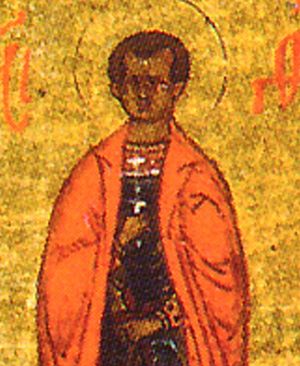 The Holy Martyr Theodotus lived in Ancyra of Galatia in the third century. He was distinguished by his kindliness and concern. At the height of the persecution under Diocletian (284-305) he provided Christians with everything they needed, and gave them shelter in his home. There they secretly celebrated church services.

St Theodotus visited the Christian captives in prison, paid their bail, and reverently buried the bodies of martyrs who had been thrown to the wild beasts. Once he buried the bodies of seven holy women martyrs, who were drowned in the sea (May 18). They reported this to the governor.

After refusing to offer sacrifice to idols, and denouncing the folly of paganism, St Theodotus confessed Christ as God, for which they subjected him to terrible tortures and beheaded him with a sword. They wanted to burn the holy martyr’s body, but could not do so because of a storm which had arisen, so they gave his holy relics to a certain Christian for burial.

St Theodotus is also commemorated on May 18.

Your holy martyr Theodotus and his companions, O Lord, / through their sufferings have received incorruptible crowns from You, our God. / For having Your strength, they laid low their adversaries, / and shattered the powerless boldness of demons. / Through their intercessions, save our souls!

Podoben: “Seeking the highest...” / You struggled well, O Theodotus, / together with your fellow athletes and passion-bearing virgins. / You have received crowns of honor. / Therefore, unceasingly pray to Christ God for us all.