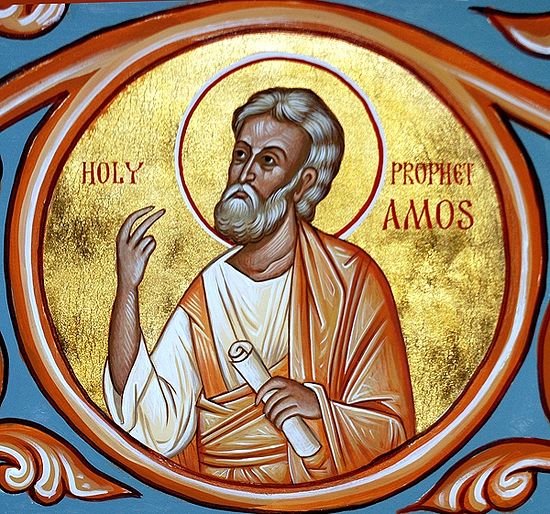 The Holy Prophet Amos, third of the Twelve Minor Prophets, lived during the eighth century before Christ. At this time the Hebrew nation was divided into two kingdoms: Judea and Israel. The Judean king Hosiah ruled in Jerusalem, but the ten separated Israelite tribes were ruled by Jeroboam II, an idol-worshipper. At Bethel he set up an idol in the form of a golden calf, which they worshipped, after they rejected the God of Israel.

The Prophet Amos was a Judean, from the city of Thecua in the land of Zebulon. Simple and untaught, but fervent in faith and zealous for the glory of the true God, this former shepherd and dresser of sycamore trees (Amos 7:14-15) was chosen by the Lord for prophetic service. He was sent to the kingdom of Israel to denounce the impiety of King Jeroboam, and also the Israelites for falling away from God. The prophet predicted a great misfortune which would befall Israel and the neighboring pagan nations, because of their impiety. As a result of his denunciations, the Prophet Amos repeatedly suffered beatings and torture. He returned to Bethel, and threatening inevitable misfortunes, he continued to call the Israelites to repentance.

The idolatrous priest Amaziah of the pagan temple particularly hated the prophet. The prophet predicted speedy destruction for him and all his household, and for this he was subjected to beatings. Hosiah, the son of Amaziah, struck the saint on the head with a club and seriously wounded him. Still alive, the Prophet Amos reached his native village and died there around 787 B.C. He is not to be confused with Amos, the father of the Prophet Isaiah.

Celebrating the memory / Of Your Prophet Amos, O Lord, / For his sake, we entreat You, save our souls.

Purifying your fervent heart by the Spirit, / O glorious Prophet Amos, / And receiving the gift of prophecy from on high, / You cry with a loud voice to the nations: / This is our God, and there is none beside Him.