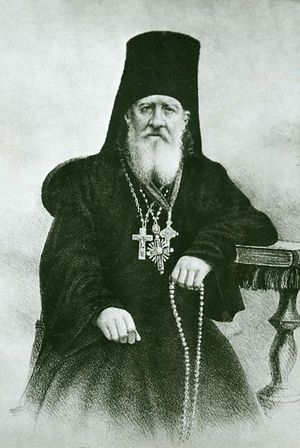 Saint Moses (Putilov) was born on January 15, 1782 in the city of Borisogleb in the Yaroslavl province, and was baptized with the name Timothy. His siblings were called Jonah, Basil, Cyril, Anysia, and Alexander. John Putilov named all his children after the saint commemorated on the eighth day after their birth, so the future St Moses was named for the holy Apostle Timothy of the Seventy (January 22). The children were educated at home, since their parents feared they would be corrupted in some way if they were sent away to school.

When Timothy was nineteen, his father sent him and his younger brother Jonah to work in Moscow. While in Moscow they met the Elders Alexander and Philaret of the Novospassky Monastery, who had spiritual ties to St Paisius Velichkovsky (November 15). Through their aquaintance with these two ascetics of piety, the brothers decided that they also wished to become monks. In May of 1805 they visited the Sarov monastery (which their widowed brother-in-law Cosmas Krundishev had entered in November 1804) and spoke with St Seraphim (January 2). The brothers remained at Sarov for two and a half years. At first they were assigned to the bakery, and then to other obediences.

In 1811, following the advice of Hieromonk Alexis of Moscow’s Simonov Monastery, Timothy went to live with the hermits of the Roslavl forests. There he was placed under the guidance of Elder Athanasius, a disciple of St Paisius Velichkovsky. In time, he received the monastic tonsure from Fr Athanasius and was named Moses. His sponsor at his tonsure was Elder Dositheus, who had lived in the Rostov forests for forty years.

Alexander, the youngest brother of Fr Moses, came to the Roslavl forest on January 15, 1816 to share the life of the monks. Four years later, he was tonsured with the name Anthony. He was placed in the care of Fr Moses, to whom he remained obedient for the rest of his life.

In 1821 Bishop Philaret of Kaluga (later Metropolitan of Kiev) suggested that the Putilov brothers move to the Optina Hermitage with a few monks and establish a skete near the monastery, where they could live in greater solitude. Sts Moses and Anthony arrived at Optina on July 6, 1822 to begin their labors. Their first task was to clear away some trees from the place they had chosen, and to uproot the stumps. They built a small cell and enclosed it with a fence, and also built a church dedicated to St John the Baptist.

Bishop Philaret suggested that Fr Moses be ordained, but he absolutely refused to consider it. The bishop said, “If you do not agree to this, I will call you to account for it at the Dread Judgment of the Lord.” Only then would Fr Mose consent. He was ordained as a deacon on December 22, 1822, and to the holy priesthood on December 25. At the same time, he was appointed Father Confessor for the whole monastery.

Fr Moses was chosen to be the Superior of Optina Hermitage in 1826 when he was forty-three, serving in this capacity for thirty-seven years. He was prepared for this service by his years of living in the wilderness under the guidance of his Elder, and by his study of patristic writings. He was mature in years, and he had also acquired a spiritual maturity through his patient endurance of tribulations and acceptance of God’s will in all things.

Optina underwent many changes during this time, and the number of monks increased. The size of the monastery’s property was doubled, orchards of fruit trees and berry bushes were planted, a library was established, and many buildings were constructed, including a cathedral and two churches.

St Moses did not have the money for all these projects, but he undertook them anyway, trusting in God to provide the means. Sometimes he would even travel to Moscow to solicit donations to the monastery. When people asked if he had enough money for his projects, he would show them a few roubles. Someone would say, “Father, that is nothing!” Then Fr Moses would reply, “Are you forgetting about God? I may have nothing, but He has everything.”

During a time of famine there was scarcely enough food to feed the monks. It was just then that Fr Moses began the construction of guest houses on the monastery grounds and hired people from the neighboring towns and villages to do the work. The monastery not only paid their wages, but also fed their families. One of the monks was concerned that the coming famine would force them to postpone the construction and lay off the workers. St Moses told him that the people would not starve, because as long as God sent gifts to the monastery they would share them with the people.

Though he was short-tempered by nature, St Moses struggled to acquire patience and meekness. If he felt himself becoming angry, he would leave to pray by himself for a while. Once he had calmed down, he would return. He would also advise people to keep the rule of St Dorotheus (June 5) for being at peace: “Do not desire that things turn out the way you would like, but desire whatever happens. That way you will be at peace” (Seventeenth Instruction).

St Moses did not sleep much. He would arise before midnight, and usually came to church for Matins. He said that the Bloodless Sacrifice was offered for us at Liturgy, and so the monk should sacrifice his own rest at Matins.

During Fr Moses’ time the monastery published sixteen volumes of patristic writings under the direction of St Macarius (September 7). St Moses would send these books free of charge to various monasteries and individuals for their spiritual benefit.

Although St Moses concerned himself with every aspect of the monastery’s life, his greatest achievement was to establish eldership at Optina. He received St Leonid (October 11) and St Macarius into the monastery, yet he submitted his will to them. He made no decisions, and would not tonsure any monk without first seeking their counsel. St Moses had the gift of eldership himself, but preferred not to offer spiritual counsel to the brethren. He left this to Fr Leonid or Fr Macarius.

The saint endeavored to hide his spiritual gifts from others, but people knew that he was clairvoyant, and that his holy prayers were answered by God. Whenever anyone praised him for anything, he would smile and say, “I do not agree with you. I have my doubts.”

A few hours later, St Moses raised his right hand and those in the room came to receive his blessing. He continued to bless, even when there was no one there. Evidently, he was blessing people he knew in other places. Later the monastery received a letter from a person in St Petersburg who said that he had seen St Moses in a dream at the very hour when he was dying and blessing those who were absent. He seemed to see the Elder lying on a bed and blessing each individual member of this person’s family.

Then it was decided to resume reading the Gospel over Fr Moses. The monks took turns reading until about ten o’clock when the Elder breathed a little sigh and surrendered his soul to God. At that very moment, the monk who was reading reached the end of the sixtenth chapter of the Gospel of St Matthew: “For the Son of man shall come in the glory of his Father with his angels; and then he shall reward every man according to his works. Truly I say unto you, there are some standing here who shall not taste of death until they see the Son of man coming in his kingdom.” (Matthew 16:27-28).

Early in his life, when he visited the Sarov monastery and saw the life of the monks there, he resolved not to possess anything during his life. Ironically, he was forced to deal with raising money for building projects, and with paying the workers at Optina. After his death the money coffer in which he kept the monastery funds was opened. Inside they found a single ten kopek coin stuck between the bottom and side of the chest. His brother St Anthony remarked, “Fr Moses probably did not notice it, otherwise he would have spent it.”

Several years after his death, the holy relics of St Moses were found to be incorrupt.

The Moscow Patriarchate authorized local veneration of the Optina Elders on June 13,1996. The work of uncovering the relics of Sts Leonid, Macarius, Hilarion, Ambrose, Anatole I, Barsanuphius and Anatole II began on June 24/July 7, 1998 and was concluded the next day. However, because of the church Feasts (Nativity of St John the Baptist, etc.) associated with the actual dates of the uncovering of the relics, Patriarch Alexey II designated June 27/July 10 as the date for commemorating this event. The relics of the holy Elders now rest in the new church of the Vladimir Icon of the Mother of God.