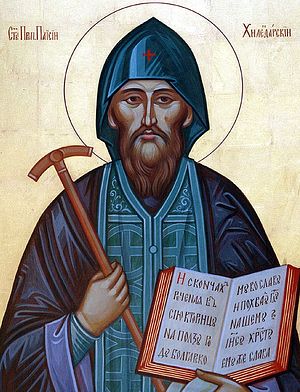 Saint Paisius of Hilandar was born in the year 1722 in Bansko into a pious family. One of his brothers, Laurence, was igumen of Hilandar Monastery, and another was noted as a generous benefactor of Orthodox temples and monasteries. St Paisius himself went through his obedience at Rila Monastery.

In 1745 at age twenty-three, St Paisius went to his brother in the Hilandar Monastery on Mount Athos, where he received monastic tonsure. The ascetic matured spiritually on the Holy Mountain. He studied Holy Scripture and he was found worthy of ordination to the holy priesthood.

In the year 1762 St Paisius wrote The History of the Slavo-Bulgarians, a book upholding the Christian Faith and awakening the national self-awareness of the subjugated Bulgarian nation.

Amid the darkness of foreign oppression the saint rekindled the lamp of Orthodoxy, lit formerly by Sts Cyril and Methodius (May 11). The time and place of the saint’s blessed end is unknown.

On June 26, 1962 the Holy Synod of the Bulgarian Orthodox Church under the presidency of His Holiness Patriarch Cyril, and with the participation of all the Metropolitans, expressed the indebtedness of the Church and country to St Paisius. They decreed that Paisius of Hilandar and Bulgaria be glorified as a saint, and directed that his memory be celebrated on June 19, “when, according to the Orthodox calendar, St Paisius the Great is commemorated.”

The name of St Paisius is borne by a state university in Plovdiv, and by many institutes and schools in other cities and villages of Bulgaria. This testifies to the deep veneration of the saint by the Bulgarian nation.