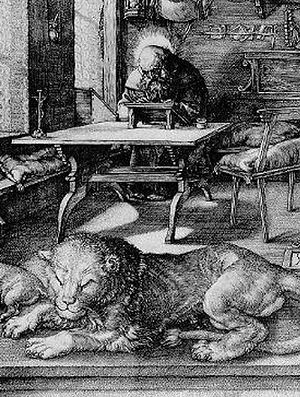 Saint Jerome of Stridon was born into a Christian family in the city of Stridon located on the border between Dalmatia and Pannonia. His full name is Eusebius Hieronymos Sophronius. His parents sent him to Rome, where he studied the secular sciences. At the beginning of his life in the capital, the youth was captivated by worldly vanities and fell into temptation. At the end of his time in Rome, Jerome resolved to change his life and to live in goodness and purity. When the youth was about 20 years old, he accepted holy Baptism. After this he visited in Gaul (France). Then St Jerome decided to dedicate himself totally to God, and to become a monk.

In about the year 372 St Jerome returned to his native city, but his parents had already departed this life. On him fell the responsibility of raising his younger sisters and his brother Paulinian. These cares forced him to put aside his plans to enter a monastery, at least for a time.

Having made arrangements for the care of his siblings, he journeyed to the East with several of his friends. In 374, he decided to dwell in the desert of Chalcis southeast of Antioch. There he remained for about 5 years, combining work on the Holy Scriptures with austere ascetic deeds. Besides this, St Jerome mastered the Hebrew and Chaldean languages. During this period he began his correspondence with numerous persons upon a variety of questions. About 120 letters, considered as authentically written by St Jerome, have been preserved.

At the beginning of the 360s there arose a controversy between the proponents of bishops Meletius, Paulinos and Vitalis. The controversy also reached the monastery where St Jerome toiled. In consequence, the disputes caused him to leave the monastery and go to Antioch. Here Bishop Paulinos ordained him to the priesthood. Afterwards, St Jerome visited Constantinople and conversed with the holy hierarchs Gregory the Theologian and Gregory of Nyssa In the year 381 he set off for Rome. At Rome he continued his studies. The holy Pope Damasus I (366-384), who also devoted much of his time to the study of Holy Scripture, made Jerome his secretary.

But because the saint denounced the morals of the contemporary Christian society, a whole party of those bearing malice towards the saint came forward to spread slanders about him. After a three year stay at Rome, St Jerome felt compelled to abandon this city for good. Together with his brother Paulinian and friends, St Jerome visited the Holy Land, and also the monks of the Nitria wilderness monastery. In the year 386 he settled into a cave at Bethlehem near the cave where Christ was born, and there he began a life of austere asceticism.

This was the period of blossoming of his creative activity. Attending to the studies of his time, St Jerome left to the Church a rich written legacy: collections of dogmatic-polemic works, moral-ascetic works, commentaries on Scripture, and historical works. But the most important of his works was a new translation the books of the Old and New Testaments into the Latin language. This Latin translation is called the “Vulgate,” and it passed into general use throughout the Western Church.

St Jerome lived through the fall of his beloved city Rome, which was sacked by the Goths in the year 410. In the year 411 a new ordeal beset the saint, Bethlehem was invaded by wild Bedouin Arabs. Only through the mercy of God was the community of the aged ascetic saved from complete destruction. He finished his life at the cave in Bethlehem. St Jerome is believed to have reposed in 420. His relics were transferred from Bethlehem to Rome in 642, but their present location is unknown. His hand is enshrined in a church near Rome’s Piazza Farnese.