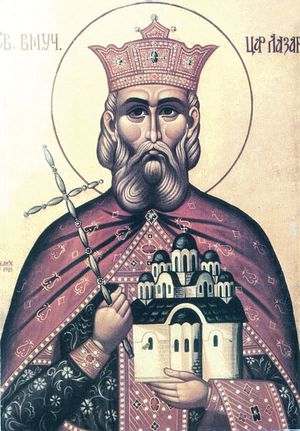 The Holy Prince Lazar of Serbia lived during the fourteenth century at a time when the Turks, having conquered neighboring lands, were preparing to invade Serbia.

St Lazar was raised at the court of the holy King Dushan, and was appointed governor of one of the Serbian districts. In the year 1371 he was chosen King of all Serbia and he toiled much at strengthening the condition of the country. He pacified neighboring princes, who had wronged or plundered Serbian settlements. He was concerned also for the Christian enlightenment of the nation, he built churches, supported the monasteries and charitable establishments. In 1380 the saint established the monastery at Rovanetz. Saint Lazar petitioned the Patriarch of Constantinople to remove the anathema from the people of Serbia. During the course of the ten years of his rule, Serbia was at peace.

Afterwards there began war with the Turks. At the time of the Battle of Kosovo, the wounded king was taken prisoner. On the orders of Sultan Bayazet, he was beheaded with a sword on June 15, 1389. The body of the holy King Lazar was buried at a nearby church. In 1391 his incorrupt relics were transferred to the Ravanica monastery. The monastery was destroyed by the Turks in 1683, and the relics of King Lazar were transferred to the monastery of New Ravanica on Mount Thruzh. He was the founder of the Monastery of St Panteleimon on the Holy Mountain, as well as numerous other monasteries and churches.

Longing for the beauty of God’s glory, / you were found pleasing to Him while yet in the flesh / and by good deeds multiplied the talents entrusted to you. / Having suffered greatly, even to the shedding of your blood, / you received the crown of martyrdom from Christ. / By your prayers, O Lazar, entreat Him to save us who sing to you.

Your flock glorifies you as a valiant champion of true piety / and a glorious martyr, O most wise Lazar. / Since you have boldness before Christ our God, entreat Him to grant peace to those who praise you, / that we may cry: “Rejoice, O praise-worthy Lazar!”