Repose of St Job the Patriarch of Moscow, and All Russia 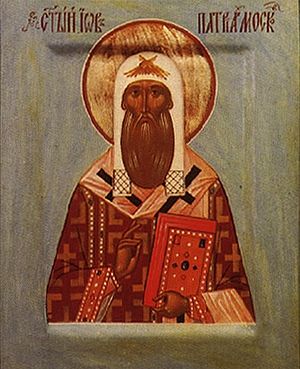 Saint Job, the first Patriarch of Moscow, was born into the family of pious tradesmen in Staritsa near Tver in the 1530s. His baptismal name was John.

After his death in 1607, the relics of Patriarch Job were buried by the western doors of the Dormition Church of the monastery in Staritsa. Many miracles took place at his grave.

In 1652, on the recommendation of Metropolitan Nikon of Novgorod, Tsar Alexei ordered that the relics of St Job and St Philip (January 9) be transferred to Moscow.

Metropolitan Barlaam of Rostov presided at the uncovering of St Job’s relics in Staritsa. The Patriarch’s incorrupt and fragrant relics became the source of healing for many who were afflicted by physical and mental illnesses.

On March 27 a procession set off for Moscow with the relics. On Monday of the sixth week of Lent (April 5), the relics of Patriarch Job were brought to the Passions Monastery. From there, the procession proceeded to the Kremlin, and the relics of the saint were placed in the Dormition cathedral. A few days later, Patriarch Joseph died and was buried next to St Job.

St Job has long been revered as a worker of miracles. The Altar Crosses in the churches of the Staritsa monastery and the Tver cathedral contained particles of his holy relics.