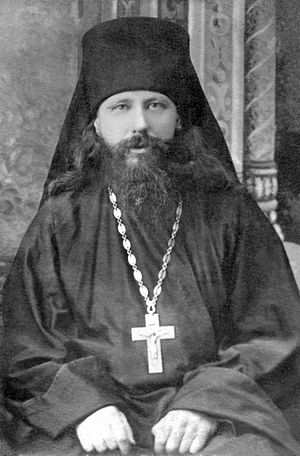 Saint Nikon was born on September 26, 1888, the son of Metrophanes and Vera Belyaev, and was named Nicholas at his Baptism. His parents, who were both very devout, belonged to one of Moscow’s merchant families.

The Belyaev family received a visit from St John of Kronstadt when Nicholas was in his first year. He blessed Vera and gave her a signed photograph of himself.

Both Nicholas and his brother John loved going to church and reading the Holy Scriptures and other spiritual books. When John and Nicholas decided to embrace monasticism, they cut up a list of Russia’s monasteries from an old book, and Nicholas was asked to pick one of the strips after praying to God. The strip he selected read, “The Optina Hermitage of the Entry of the Theotokos into the Temple, Kozelsk.” Until that moment, neither of them had ever heard of this monastery.

The brothers traveled to Optina on February 24, 1907 with their mother’s blessing, and were accepted into the monastery on December 9, the commemoration of the “Unexpected Joy” Icon of the Most Holy Theotokos.

Nicholas was assigned as secretary to Fr Barsanuphius, the Superior of the Skete, in October 1908. Except for reading and serving in church, this became his chief monastic obedience for the rest of his life. St Barsanuphius (April 1) foresaw that he would become an excellent monk as well as a worthy disciple. Nicholas was devoted to the Elder, and followed his will in all matters. Fr Barsanuphius gave him the benefit of his knowledge and experience, guiding him to ascend the spiritual ladder of virtues.

Nicholas was tonsured into the Lesser Schema on May 24, 1915 with the new name Nikon in honor of the martyr St Nikon (September 28). He was ordained as a deacon on April 30, 1916, and as a priest on November 3, 1917. Fr Nikon could not help but remember the prophecy of Fr Barsanuphius made several years before the Russian Revolution. St Barsanuphius foresaw times of difficulty for monasteries when Christians would be persecuted and suffer martyrdom. He predicted that he himself would be dead before this happened, and that Fr Nikon would live through those terrible times.

Fr Nikon was arrested and jailed on September 18, 1919 without the benefit of a trial, just because he was a monk. He was later released and permitted to return to Optina, where the monks had formed a farming cooperative.

The Soviets closed the cooperative in 1923, and the monastery was turned into a museum. Two monks were allowed to stay and work in the museum, while the others were expelled and told to go wherever they wished. Fr Nikon was blessed by Fr Isaac to serve in the church dedicated to the Kazan Icon and to receive visitors. When people came to him for advice, he always quoted the words of the Optina Elders.

The last church at Optina was closed early in 1924, and Fr Nikon was obliged to leave in June. He went to live at Kozelsk with Father Cyril Zlenko. There he continued to receive visitors and offer spiritual counsel, sharing money and food with those who were too old, or too sick to work. Fr Nikon was a wise spiritual Father, who was able to help people overcome their shame and reveal the sins which had troubled them for a long time. People would leave Fr Nikon feeling cleansed and renewed.

Fr Nikon, Fr Cyril, and Fr Agapitus Taub were arrested and thrown into prison in June of 1927. Fr Nikon and Fr Agapitus were sent to the “Kemperpunkt” camp, where Fr Nikon was assigned the duty of guarding the storehouses.

St Nikon wrote to his spiritual children from the camp with cheerful words of encouragement. Although he accepted his imprisonment as God’s will, it was nevertheless difficult for him to endure. When their prison term ended, the two monks were sent into exile at Archangelsk. Before leaving the camp, Fr Nikon was examined and found to have tuberculosis. The doctors advised him to request that his place of exile be changed to a place with a more suitable climate.

He asked the advice of Fr Agapitus, who told him not to make such a request. At Archangels, Fr Nikon lodged in the home of an elderly woman who gave him little rest or peace. Every week he had to travel three kilometers to present himself before the authorities in the city of Pinyega.

While shoveling snow at the beginning of Great Lent, Fr Nikon’s leg began to hemorrhage, and he developed a high fever. His landlady did not feel any pity for him, but told him that he must leave her house so that the others would not become infected with tuberculosis.

Soon, Fr Nikon was visited by Fr Peter, who had once lived at Optina. He begged Fr Peter to take him in, which he did. Fr Peter cared for the Elder to the best of his ability. For the last two months of his life, Fr Nikon received Holy Communion almost every day, and his sufferings seemed to grow less severe. He often dictated letters to his spiritual children to Fr Peter. One day, Fr Nikon saw St Macarius of Optina (September 7) in a vision and told Sister Irene to pull up a chair for him. She was slow to obey him so he said, “Forgive her, Father, for she is not very experienced.”

On June 25, 1931 Fr Nikon was so weak that he could not speak. Archimandrite Nikita was called to bring him Communion, and to read the Canon for the Departure of the Soul. That night the Elder fell asleep in the Lord at the age of forty-three.

The Moscow Patriarchate authorized local veneration of the Optina Elders on June 13,1996, glorifying them for universal veneration on August 7, 2000.