Venerable Herman the Wonderworker of Valaam 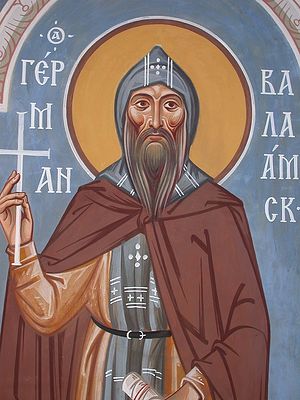 Saints Sergius and Herman settled on the island of Valaam in 1329. The brethren gathered by them spread the light of Orthodoxy in this frontier land. The Karelian people began to regard Christianity with renewed suspicion, with its authority in the fourteenth century being undermined by the Swedes, who sought to spread Catholicism by means of the sword.

Sts Sergius and Herman died about the year 1353. They are also commemorated on September 11 (The translation of their holy relics).

Fulfilling the Gospel of Christ and loving him alone, / Despising earthly cares you settled on an island. / There you fought against the invisible foe, / Subjecting your bodies to the Spirit by fasting, vigil and prayer. / Crowned with glory and now standing before the Trinity, / Pray, O Fathers Sergius and Herman, / That our souls may be saved!

You left the world to follow in Christ’s footsteps, / Reaching Lake Neva and the island of Valaam. / There you lived the angelic life / And were translated to the heavenly bridal chamber. / As you stand with the angels remember the children whom you gathered, / That we may joyfully cry to you: / Rejoice, blessed Fathers Sergius and Herman!”