Synaxis of the Holy, Glorious and All-Praised Twelve Apostles 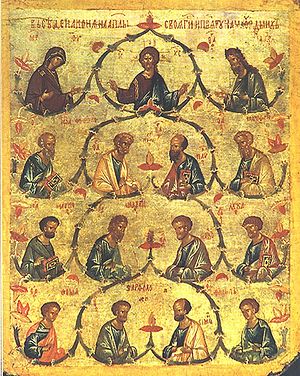 The holy God-crowned Emperor Constantine the Great (May 21) built a church in Constantinople in honor of the Twelve Apostles. There are instructions for celebrating this Feast which date from the fourth century.

Podoben: “Seeking the highest...” / Today Christ the Rock glorifies with highest honor / Peter, the rock of faith and leader of the apostles, / together with Paul and the company of the twelve, / whose memory we celebrate with eagerness of faith, / giving glory to the One Who gave glory to them.