Translation of the relics of Hieromartyr Philip the Metropolitan of Moscow 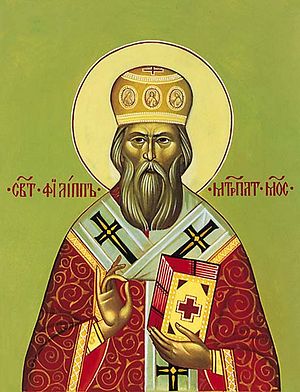 The Transfer of the Relics of Saint Philip, Metropolitan of Moscow and Wonderworker of All Russia: After the martyric death of St Philip (January 9), his body was buried at the Otrocha monastery, in Tver. The monks of the Solovki monastery, where he was formerly igumen, in 1591 requested permission for the transfer of his relics to their monastery. The much-suffering and incorrupt body was placed in a grave, prepared by St Philip for himself while still alive, beneath the portico of a temple of Sts Zosima and Sabbatius of Solovki, nearby the grave of the Elder Jonah (Shamin), his beloved guide in monastic deeds.

On April 29, 1649 a grammota by Patriarch Joseph was sent to Elias, the igumen of the Solovki monastery, concerning the solemn uncovering of the relics of St Philip. On May 31 the relics were transferred into a new reliquary and placed in the Transfiguration cathedral.

In 1652 Nikon, then Metropolitan of Novgorod, proposed that the relics of the three martyred hierarchs: Metropolitan Philip, and Patriarchs Job and Hermogenes be transferred to Moscow. With the blessing of Patriarch Joseph, Metropolitan Nikon set off in 1652 to Solovki for the relics of St Philip and solemnly conveyed them to Moscow. Into the hand of the saint was put a document of repentance by Tsar Aleksei Mikhailovich, in which he asked the forgiveness of sins of his great-grandfather Ivan the Terrible, “transgressing” his own power afront the power of the Church. On July 3 the holy relics were met in Moscow: “a pastor, innocent and cast out, was returned to his own throne.” In the Dormition cathedral, “he stood in his own place for 10 days.” All day, from morning until night, the bells rang as if it were Pascha. Afterwards the holy relics were placed in the Dormition Cathedral at the south door of the altar.

At the place where the relics of St Philip were met in Moscow by clergy and people, a cross was set up, which gave its name to the Cross Tollgate in Moscow (at the Rizhsk rail-station).

O foremost pillar of Orthodoxy / And defender of the truth / The new confessor Philip laid down his life for his flock / Therefore having boldness before Christ our God / Pray for this city and people who honor your holy memory.