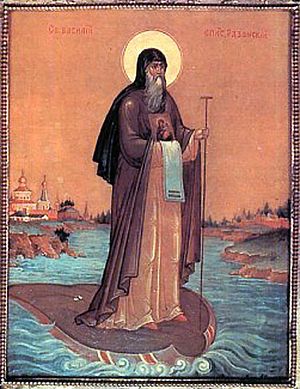 Saint Basil, Bishop of Ryazan and Murom: His memory is celebrated by the Church on June 10 and July 3 (the day of his death in 1295). On June 10, 1609 the holy relics of Bishop Basil at Ryazan were uncovered and transferred to the Dormition cathedral church.

St Basil I, Wonderworker of Ryazan, is mentioned in the Lavrentian Chronicles. In the ancient list of Ryazan hierarchs, he is mentioned as the fourth. (Basil II was consecrated as bishop in 1356 by St Alexis, Metropolitan of Moscow,). An older tradition connects with St Basil the transfer to Ryazan of the wonderworking Murom Icon of the Mother of God (April 12). St Basil was at first bishop of Murom. But by the slander of the spirit of evil, the citizens rose up against him, unjustly accusing him of transgressions unbecoming an archpastor. Then the saint, after prolonged prayer, left for the River Oka, and spreading out on the water his bishop’s mantiya he stood upon it, holding in his hands the icon of the Most Holy Theotokos of Murom. A strong wind carried him against the current and after several hours he reached Ryazan, where he was received with reverence by the prince and people of Ryazan.

Even during his lifetime St Basil was regarded a righteous and pious man. Long before his relics were uncovered at the beginning of the seventeenth century, the Ryazan people cherished his memory and called him “their constant intercessor, helper in sorrows and travail.” To him most often they turned before setting out on journeys: seeking his help against problems on dry land, and to protect them from drowning in the water.

In about the year 1540 the monk Erazm Ermolaev wrote “An Account of Basil, Bishop of Ryazan and Murom”.