Hieromartyr Athenogenes the Bishop of Heracleopolis 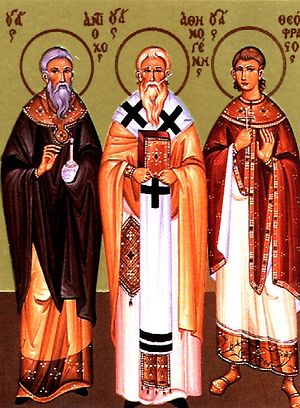 Hieromartyr Athenogenes and his Ten Disciples suffered for Christ during the persecution of Christians in the city of Sebastea in Cappadocia. The governor Philomachos arranged a large festival in honor of the pagan gods and called upon the citizens of Sebastea to offer sacrifice to the idols. Most of the inhabitants of Sebastea were Christians, and refused to participate in the impious celebration. Soldiers were ordered to kill those who resisted, and so many Christians received a martyr’s crown.

It came to the governor’s attention that Christianity was spreading because of the grace-filled preaching of Bishop Athenogenes. Soldiers were ordered to find the Elder and arrest him. Bishop Athenogenes and ten of his disciples lived in a small monastery not far from the city. The soldiers did not find the bishop there, so they arrested his disciples. The governor ordered that they be bound with chains and thrown into prison.

St Athenogenes was arrested when he came to Sebastea to inform the judge that those who had been jailed were innocent. While in prison, St Athenogenes encouraged his spiritual children for their impending struggle. Led forth to trial, all the holy martyrs confessed themselves Christians and refused to offer sacrifice to idols.

After undergoing fierce tortures, the disciples of the holy bishop were beheaded. After the execution of the disciples, the executioners were ordered to torture the bishop. Strengthened by the Lord, St Athenogenes underwent the tortures with dignity. His only request was that he be executed in the monastery.

Taken to his own monastery, the saint gave thanks to God, and he rejoiced in the sufferings that he had undergone for Him. St Athenogenes asked that the Lord would forgive the sins of all those who would remember both him and his disciples.

The Lord granted the saint to hear His Voice before death, announcing the promise given to the penitent thief: “Today you shall be with Me in Paradise.” The hieromartyr willingly bent his neck beneath the sword.

Most blessed and wise Bishop and Martyr Athenogenes, / You grew as a palm tree in the Monastic life; / Towering as a cedar in your struggles, / Through your teachings you brought a number of martyrs to Christ. / We honor them together with you.

By sharing in the ways of the Apostles, / you became a successor to their throne. / Through the practice of virtue, you found the way to divine contemplation, O inspired one of God; / by teaching the word of truth without error, you defended the Faith, / even to the shedding of your blood. / Hieromartyr Athenogenes, entreat Christ God to save our souls.

Following the Master’s teachings, / as a shepherd you laid down your life for the flock of Christ. / Therefore, we praise you and your ten disciples, who under your guidance and in the fear of God suffered with you. / With His life-creating right hand / the Lord has granted you a crown. / Pray to Him for us all, Hieromartyr Athenogenes.