Martyr Antiochus the Physician of Sebaste 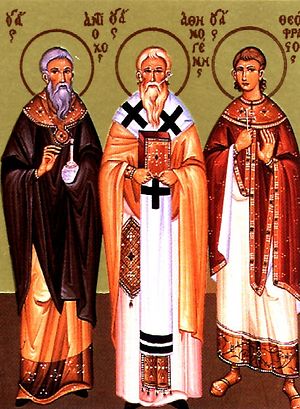 The Holy Martyr Antiochus, a native of Cappadocian Sebastea, was the brother of the holy Martyr Platon (November 18), and he was a physician. The pagans learned that he was a Christian, and they brought him to trial and subjected him to fierce tortures. Thrown into boiling water, the saint remained unharmed. He was then given over to be eaten by wild beasts, but they did not harm him. Instead, the beasts lay peacefully at his feet.

Through the prayers of the martyr many miracles were worked and the idols crumbled into dust. The pagans beheaded St Antiochus. Seeing the guiltless suffering of the saint, Cyriacus, a participant in the execution, was converted to Christ. He confessed his faith in front of everyone and was also beheaded. They buried the martyrs side by side.