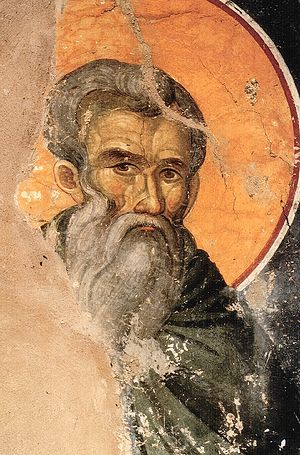 Saint Theoctistus of Palestine was a great ascetic who lived in the Judean wilderness in the Wadi Mukellik. At first, he was the companion of St Euthymius the Great (January 20) in the ascetic lfe. So great was their mutual affection and oneness of mind that they seemed to live as one soul in two bodies. They were persons of similar virtue and holiness, and they encouraged one another in their struggles. Each year after the Leave-taking of Theophany, they would go into the desert to struggle and pray in solitude, returning to their cells on Palm Sunday.

After five years together, Sts Euthymius and Theoctistus went into the desert for Great Lent, and in a wadi they discovered a large cave which later became a church. They decided to remain there, believing that they had been led there by God. They ate wild herbs to sustain themselves, and met with no other people for some time.

The Lord did not wish these great luminaries to remain hidden, however. He wanted their wisdom and holiness of life to become known in order to benefit others. One day, shepherds from Bethany found the ascetics and went back to their village and told others about them. After that, many people came to hear of them, and monks came from other monasteries to visit them. Some even stayed there in order to be instructed by them.

So many monks gathered around them that they were obliged to build a lavra over the cave church. St Euthymius made Theoctistus the igumen of the lavra, while he himself lived in seclusion in the cave. The wise Theoctistus accepted all who came to him, confessing them and treating the infirmities of their wounded souls with appropriate spiritual remedies.

When he had reached an advanced old age, St Theoctistus became very ill. St Euthymius (who was ninety years old himself) visited him and took care of him. When St Theoctistus went to the Lord in 467, Patriarch Anastasius of Jerusalem came and presided at his burial service.

Dedicated as God’s priest from your youth, / You spurned all worldly aims. / O Righteous Theoctistus you were radiant in your solitude / And strict in the training of monks. / Guide those who come to you and lead them in the way of salvation.

You kept your soul pure and presented it to God as his creation. / Enlightened by him, Theoctistus, you rose to the peak of endeavor. / By your works you confirmed the grace that was given you.