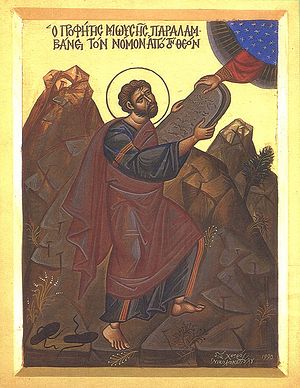 The Holy Prophet and God-Seer Moses was of the tribe of Levi, the son of Abram and Jochabed (Exodus 6:20). His life is described in the Bible (Exodus 2 through Deuteronomy 34:12).

Moses was born in Egypt around 1689 B.C. When Pharaoh ordered all male children of the Hebrew slaves to be killed (Exodus 1:22), Moses’ mother placed him in a basket of papyrus coated with pitch, and set him adrift on the Nile. Pharaoh’s daughter found him and raised him as her own son.

At the age of eighty, Moses fled to Midian, where he spoke to God in the Burning Bush on Mt. Horeb (Exodus 3:2). God chose Moses to lead His people from the slavery of Egypt. They crossed the Red Sea as if it were dry land, and for forty years they wandered in the desert.

The first two Biblical Odes are attributed to Moses: “Let us sing to the Lord...” (Exodus 15:1-9), which was sung on the shores of the Red Sea after the Hebrews had crossed it. “Attend, O heaven...” (Deut. 32:1-43) was sung in the land of Moab, a few days before Moses’ death. He is also regarded as the author of the Pentateuch (the first five books of the Old Testament).

The holy Prophet Moses performed many miracles during his lifetime, and also after his death. He appeared on Tabor with the Prophet Elias at the Transfiguration of the Lord (August 6).

On the day that St John of the Ladder (March 30) was installed as abbot of Mt. Sinai, the Prophet Moses was seen going around and giving orders to the cooks, stewards, and servants. When the guests had gone and the monks were sitting at table, they wondered what had become of the stranger who had been giving orders. St John said, “Our Lord Moses does nothing strange by serving in the place which belongs to him.”

You ascended to the heights of the virtues, Prophet Moses; / therefore, you were deemed worthy to see the glory of God. / Having received the grace-filled tablets of the Law, / and bearing the grace of the writing within yourself, / you were the honorable praise of prophets, / and a great mystery of piety.

The choir of prophets rejoices with Moses and Aaron today, / for the fulfillment of their prophecy is in our midst. / The Cross, by which You have saved us, shines forth today. / By their prayers, O Christ God, have mercy on us.