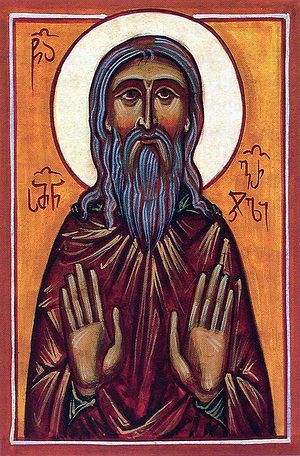 Saint Simeon was raised at Davit-Gareji Monastery. He labored as a simple monk until he reached an advanced age, and was chosen to be abbot. Outstanding in virtue and humility, St. Simeon was endowed by the Lord with the ability to work miracles.

Once St. Simeon became deathly ill and lay lifeless for more than an hour. Then, by Divine Providence, he arose and distributed all of his possessions to the fathers of the monastery to keep him in remembrance.

When St. Serapion heard about this miracle, he hastened to Abbot Simeon, his spiritual father, and, enlightened with prophetic grace, comforted him: “O honorable Father, give me your holy hands that I may kiss them. How I desire for these hands to bury the dust of my worthless body—but now you are departing this world ahead of me. You will go, Father, but without you I will not remain long on this earth; soon I will follow after you!”

So the fathers bade him farewell for the last time.

St. Simeon settled his affairs at the monastery, and in 1773 he reposed in peace, exactly one week after he had recovered from his deathly illness.