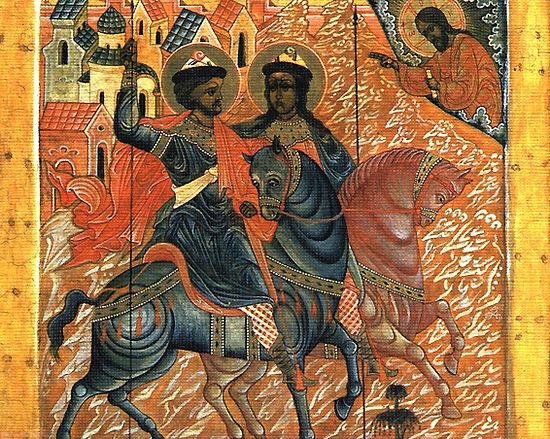 The Holy Prince Gleb, in Holy Baptism David, was one of the first Russian martyrs called “Passion-Bearers.” He suffered together with his brother Prince Boris (Roman in Holy Baptism). After the murder of St Boris, Svyatopolk the Accursed sent to his younger brother Prince Gleb a messenger with false information about their father, Great Prince Vladimir, who had died from illness, thereby using deceit to murder another possible claimant to the Kievan throne.

The deceived Prince Gleb hastened off to Kiev with a small company. His apprehensive brother Yaroslav, having caught up with him at Smolensk, was unable to delay the saint, who did not suspect such wickedness on the part of his brother Svyatopolk.

Not far from Smolensk the assassins came upon the boat of St Gleb, who made no resistance, but asked meekly that they should spare him because of his young age. At the command of the murderers Gleb’s cook slit his throat. The body of the prince was buried in a desolate place not far from Smolensk, “between two tree-trunks,” i.e., in a simple wooden coffin (+1015). In the year 1019-1020 his brother Yaroslav found the grave of St Gleb. The body, being incorrupt, was transferred to Vyshgorod near Kiev and buried beside holy Prince Boris.

Later on, the relics of the brothers were transferred (May 2) into the church of St Basil the Great, and there at the crypts of these holy Passion-Bearers many miracles were worked. Metropolitan John of Kiev compiled a service to the Passion-Bearer princes and also established a feastday for them together on July 24, which dates from the first half of the eleventh century.

The Russian Church from of old has venerated these brothers, who unceasingly have rendered prayerful assistance to their native land, particularly in years of grievous tribulation. Thus, just before the Battle of the Neva in 1240, the Passion-Bearers Boris and Gleb appeared in a vision to one of the soldiers of holy Prince Alexander Nevsky (November 23, August 30, and May 23), and they aided the Russians during the combat.

The chronicles are filled with the accounts of the various manifestations of mercy, witnessed at their tombs, and of the victories gained through their help. Many churches and monasteries were built throughout Russia in honor of the holy Passion-Bearers Boris and Gleb.