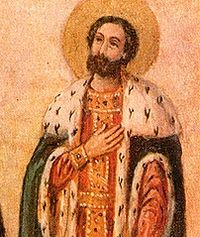 Saint Joasaph of Kubensk, Wonderworker of Vologda, was baptized with the name Andrew. His parents, Prince Demetrius Vasilievich of Lesser Zaozersk (a descendant of holy Prince Theodore Rostislavich, of Smolensk and Yaroslavl), and Princess Maria, were known for their deep piety, which they imparted to the future ascetic. At twenty years of age, Prince Andrew accepted tonsure at the Kamenny Monastery of the Savior at Kubensk with the name Joasaph, in honor of St Joasaph, the Prince of India (November 19).

St Joasaph gained a good reputation for himself by complete obedience, keeping the fasts, by his zeal in prayer, and love for books. The brethren of the monastery were amazed at the gracious meekness and humility of the young ascetic. Under the spiritual nurture of the experienced Elder Gregory, afterwards Bishop of Rostov, St Joasaph progressed in virtue. He led the life of a hermit in his cell and attained to a high spiritual level. St Joasaph lived an ascetic life at the Kamenny Monastery of the Savior for five years.

In the final year of his life, he partook of food only once during the week and received the Holy Mysteries each Sunday. Before his death, St Joasaph took leave of the brethren, consoling and admonishing the monks not to grieve over his departure. When the brethren gathered in his cell, the venerable one asked that the Prayers for the Departure of the Soul from the Body be read. He prayed to the Lord and to His All-Holy Mother, not only for himself, but for all the brethren of the monastery. Then he lay down upon his bed and died with prayer on his lips, on September 10, 1453.