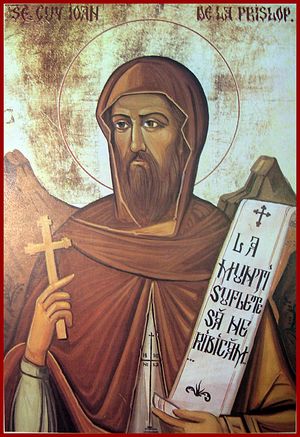 Saint John was a monk of the Prislop Monastery in southwestern Romania at the turn of the sixteenth century. After several years in that place, he went into the mountains to lead a solitary ascetical life, struggling against the assaults of the demons.

One day, while St John was making a window in his cell, he was shot and killed by a hunter on the other side of the creek, who mistook him for a wild animal.

St John’s holy relics were later brought to Wallachia (southern Romania). He was glorified by the Orthodox Church of Romania in 1992.