Venerable Nilus the Faster of Sinai 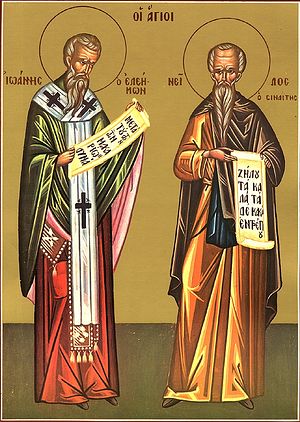 Saint Nilus the Faster of Sinai, a native of Constantinople. He lived during the fifth century and was a disciple of St John Chrysostom. Having received a fine education, the saint was appointed to the important post of prefect of the capital while still a young man. During this period, Nilus was married and had children, but the pomp of courtly life bothered the couple. St John Chrysostom exerted a tremendous influence upon their lives and their strivings. The spouses decided to separate and devote themselves to the monastic life.

The wife and daughter of Nilus went to one of the women’s monasteries in Egypt, and St Nilus and his son Theodulus went to Sinai, where they settled in a cave dug out by their own hands. For forty years this cave served as the dwelling of St Nilus. By fasting, prayer and works, the monk attained a high degree of spiritual perfection. People began to come to him from every occupation and social rank from the emperor down to the farmer, and each found counsel and comfort from the saint.

At Sinai, St Nilus wrote many soul-profiting works to guide Christians on the path of salvation. In one of his letters there is an angry denunciation of the emperor Arcadius, who had exiled St John Chrysostom. The ascetic works of the venerable Nilus are widely known: they are perfectly executed in form, profoundly Orthodox in content, and are clear and lucid in expression. His Ascetic Discourse is found in Volume I of the English PHILOKALIA.

St Nilus suffered many misfortunes in the wilderness. Once, Saracens captured his son Theodulus, whom they intended to offer as a sacrifice to their pagan gods. Through the prayers of the saint the Lord saved Theodulus, and his father found him with the Bishop of Emessa, who had ransomed the young man from the barbarians. This bishop ordained both of them as presbyters. After ordination they returned to Sinai, where they lived as ascetics together until the death of St Nilus.

By a flood of tears you made the desert fertile, / and your longing for God brought forth fruits in abundance. / By the radiance of miracles you illumined the whole universe! / Our Father Nilus, pray to Christ God to save our souls!

By your vigilant prayer you cut away the undergrowth of the body’s insurgent passions. / As you have boldness before the Lord, free me from every danger so that I may cry to you: / “Rejoice, universal father Nilus.”