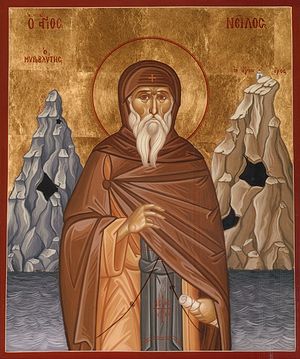 Saint Nilus the Myrrh-Gusher of Mt Athos was born in Greece, in a village named for St Peter, in the Zakoneia diocese. He was raised by his uncle, the hieromonk Macarius. Having attained the age of maturity, he received monastic tonsure and was found worthy of ordination to hierodeacon, and then to hieromonk.

The desire for greater monastic struggles brought uncle and nephew to Mt Athos, where Macarius and Nilus lived in asceticism at a place called the Holy Rocks. Upon the repose of St Macarius, the venerable Nilus, aflame with zeal for even more intense spiritual efforts, found an isolated place almost inaccessible for any living thing. Upon his departure to the Lord in 1651, St Nilus was glorified by an abundant flow of curative myrrh, for which Christians journeyed from the most distant lands of the East.

St Nilus has left a remarkably accurate prophecy concerning the state of the Church in the mid-twentieth century, and a description of the people of that time. Among the inventions he predicted are the telephone, airplane, and submarine. He also warned that people’s minds would be clouded by carnal passions, “and dishonor and lawlessness will grow stronger.” Men would not be distinguishable from women because of their “shamelessness of dress and style of hair.” St Nilus lamented that Christian pastors, bishops and priests, would become vain men, and that the morals and traditions of the Church would change. Few pious and God-fearing pastors would remain, and many people would stray from the right path because no one would instruct them.