Icon of the Mother of God “the Merciful” 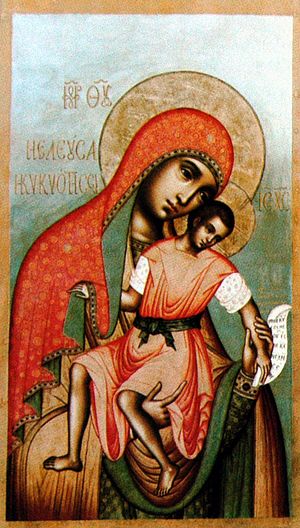 The All-Merciful Kykko Icon of the Mother of God: This icon was painted, according to Tradition, by the holy Evangelist Luke. It received its name “Kykkiotisa” from Mount Kykkos, on the island of Cyprus. Here it was placed in an imperial monastery (so designated because it was built with donations from the Emperor), in a church named for it. Before coming to the island of Cyprus, the wonderworking icon of the Mother of God was brought throughout the region by the will of God. At first, it was in one the earliest Christian communities in Egypt, and then it was taken to Constantinople in 980, where it remained in the time of Emperor Alexius Comnenos (end of the eleventh to early twelfth century).

During these years it was revealed to the Elder Isaiah through a miraculous sign, that by his efforts the wonderworking image painted by the Evangelist Luke would be transferred to Cyprus. The Elder exerted much effort to fulfill the divine revelation.

When the icon of the Mother of God arrived on the island, many miracles were performed. The Elder Isaiah was instrumental in building a church dedicated to the Theotokos, and placing the Kykko Icon in it. From ancient times up to the present day, those afflicted by every sort of infirmity flock to the monastery of the Mother of God the Merciful, and they receive healing according to their faith. The Orthodox are not the only ones who believe in the miraculous power of the holy icon, but those of other faiths also pray before it in misfortune and illness.

A copy of this icon is particularly venerated at the women’s Nikolsk monastery in the city of Mukachev.