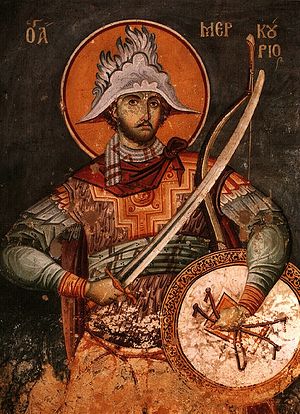 The Holy Great Martyr Mercurius, a Scythian by descent, served as a soldier in the Roman army. The impious emperors Decius (249-251) and Valerian (253-259) issued a decree ordering all Roman citizens to worship the pagan gods, and condemning Christians to torture and death unless they obeyed the decree.

At that time barbarians attacked the Roman empire, and the emperor Decius went on campaign with a large army. In one of the battles an angel of the Lord appeared to Mercurius in the guise of a nobleman and presented him a sword saying, “Fear not, Mercurius. Go forth bravely against the enemy, and when you are victorious, do not forget the Lord your God.” With this sword the holy warrior cut through the ranks of the barbarians. He also killed their king, winning victory for the Romans. The grateful Emperor Decius rewarded Saint Mercurius for his bravery, and made him commander of the entire army.

The angel of the Lord appeared again to the holy warrior, who had received great honors and riches, and reminded him by Whom the victory had been given. He also told General Mercurius that he would suffer for Christ, and would receive a crown of victory in His Kingdom. Mercurius recalled that his father Gordian had also confessed the Christian Faith. Although the saint had been baptized, he felt he had not devoted his life to God as his father and grandfather had done. Thus, he was weeping and lamenting when he was summoned before the emperor.

Decius consulted Mercurius on matters of state, then suggested that they offer sacrifice in the temple of Artemis. Not wishing to do this, the saint returned to his home. He was denounced as a Christian by a nobleman, whose name was Catullus. The emperor would not believe this, however, until he himself had questioned the saint. Openly declaring himself a Christian, Mercurius threw down his military belt and cloak at the emperor’s feet, and he repudiated all the honors he had received. The angel of the Lord again appeared to Saint Mercurius in the prison, encouraging him to endure every suffering for Christ.

They stretched the holy martyr between four pillars and lit a fire beneath him. They cut his body with knives, and so much blood flowed from his wounds that it extinguished the fire. When they threw him back into the prison nearly dead from his wounds, Saint Mercurius was healed by the Lord, demonstrating the great power of Christ to the impious pagans. Condemned to death, the saint was deemed worthy of a vision of the Lord, Who promised him a quick release from his sufferings. The Great Martyr Mercurius was beheaded at Caesarea in Cappadocia. His holy body emitted a fragrance like myrrh and incense. Many of the sick were healed at his tomb.

Even after his death the warrior of Christ performed a soldier’s service for the good of the earthly Church. Saint Basil the Great (January 1) once prayed before an icon of the Most Holy Theotokos, upon which Saint Mercurius was depicted as a soldier holding a spear. He asked God not to permit the emperor Julian the Apostate (361-363) to return from his war against the Persians and resume his oppression of Christians. The image of the holy Great Martyr Mercurius, depicted on the icon beside the image of the Most Holy Theotokos, became invisible. It reappeared later with a bloodied spear.

At this very moment Julian the Apostate, on his Persian campaign, was wounded by the spear of an unknown soldier, who immediately disappeared. The mortally wounded Julian, as he lay dying, cried out, “Thou hast conquered, O Galilean!”

Your holy martyr Mercurius,O Lord, / through his sufferings has received an incorruptible crown from You, our God. / For having Your strength, he laid low his adversaries, / and shattered the powerless boldness of demons. / Through his intercessions, save our souls!

In battle an invincible warrior / and in calamity a bold protector; / we bless Mercurius / and we praise him with songs: / for he saves from calamities and sorrows / those who joyously celebrate his memory.