Empress Augusta, Porphyrius the General, the 50 philosophers and the 200 Soldiers martyred with the Great Martyr Catherine 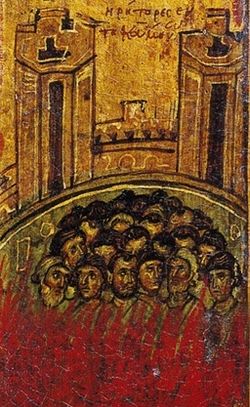 As we read in the life of Saint Catherine, the Emperor Maximian ordered 50 of the Empire's most learned philosophers and rhetoricians to dispute with Great Martyr. As a result of her eloquent testimony, however, they embraced the Christian faith and were summarily burned alive by Maximian's order, after Saint Catherine made the Sign of the Cross over them.

Thereafter, the Empress Augusta, who had heard much about Catherine, wanted to see her. She prevailed upon the military commander Porphyrius to accompany her to the prison with a detachment of soldiers. The Empress was deeply impressed by the tenacious faith displayed by Saint Catherine, whose face was radiant with divine grace. After she had explained the Christian teaching to them, they too embraced the Christian faith.

The next day, Catherine was again brought to the judgment court where, under the threat of being broken on the wheel, she was urged to renounce the Christian Faith and offer sacrifice to the gods. She steadfastly confessed Christ and she herself approached the wheels, but an angel smashed the instruments of execution, which shattered into pieces. Having beheld this wonder, the Empress Augusta, Porphyrius and the detachment of 200 soldiers publicly confessed their faith in Christ. Enraged, Maximian again tried to entice Catherine to renounce her faith, proposing marriage to her, but again she refused his offer and firmly confessed her fidelity to the heavenly Bridegroom Christ. After offering a prayer to Him, she herself laid her head on the block beneath the executioner’s sword and was beheaded, as was the Empress Augusta, Porphyrius and the 200 soldiers.