Hieromartyr Peter the Archbishop of Alexandria 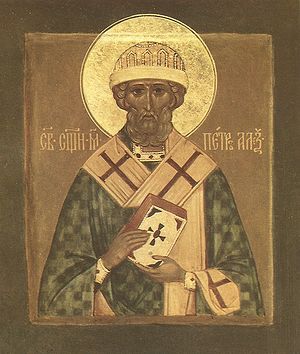 The Holy Hieromartyr Peter, Archbishop of Alexandria, was born and raised at Alexandria. He was a highly educated man, and was head of the school of Alexandria. In the year 300 he became the archpastor of the Alexandrian Church, succeeding his teacher and spiritual guide, the holy Bishop Theonas.

Forced into exile from the city during the anti-Christian persecutions under the emperors Diocletian and Maximian, Saint Peter traveled through many lands, encouraging his flock by letter. Again returned to his city, in order to guide the Alexandrian Church personally during this dangerous period. The saint secretly visited Christians locked up in prison, encouraging them to be steadfast in faith, assisting the widows and orphans, preaching the Word of God, constantly praying and officiating at the divine services. And the Lord kept him safe from the hands of the persecutors.

During this time of unrest the iniquitous heretic Arius, who denied the divinity of Jesus Christ, sowed the tares of his impious teaching. When Arius refused to be corrected and submit to the truth, Saint Peter anathematized the heretic and excommunicated him from the Church. Arius then sent two of Saint Peter’s priests to beg the saint to lift the excommunication from him, pretending that he had repented and given up his false teachings. This was not true, for Arius hoped to succeed Saint Peter as Archbishop of Alexandria. Saint Peter, under the guidance of the Holy Spirit, saw through the wickedness and deceit of Arius, and so he instructed his flock not to believe Arius nor to accept him into communion.

Under the wise nurturing of Saint Peter the Church of Alexandria strengthened and grew in spite of the persecutions. But finally, on orders from the emperor Maximian (305-311), the saint was arrested and sentenced to death. A multitude of people gathered at the entrance of the prison, expressing their outrage. Wanting to avoid bloodshed and a riot by the people, the saint sent a message to the authorities, in which he suggested that they make an opening in the back wall of the prison, so that he might be taken away secretly to execution.

In the dark of the night Saint Peter went with the executioners, who took him beyond the city walls and beheaded him at the same spot where formerly Saint Mark had been executed. That night a certain pious virgin heard a Voice from heaven saying, “Peter was first among the Apostles; Peter is the last of the Alexandrian Martyrs.” This took place in the year 311. In the morning, when people learned of the death of their bishop, a crowd gathered at the place of execution. They took up the body and head of the martyr and went to the church, dressing him in his bishop’s vestments, they sat him in his throne at the high place in the altar. During his life Saint Peter never sat on it, but sat on a footstool instead. The saint once explained that whenever he approached his throne he beheld a heavenly light shining on it, and he sensed the presence of a divine power. Therefore, he didn’t dare to sit there.

The Lord Jesus Christ once appeared to Saint Peter as a twelve-year-old child wearing a robe that was torn from top to bottom. Saint Peter asked the Savior who had torn his garment, and He replied, “That madman Arius has torn it by dividing the people whom I have redeemed by My blood. Do not receive him into Communion with the Church, for he has worked evil against Me and My flock.”

Saint Peter, a great champion of Orthodoxy, is known also as a profound theologian. Passages from his book, “On the Divinity (of Jesus Christ)”, were consulted at the Councils of Ephesus and Chalcedon. Of all his works, the most widely known and highly esteemed by the Church are his “Penitential Canons”.

O God of our Fathers, / always act with kindness towards us; / take not Your mercy from us, / but guide our lives in peace / through the prayers of the hierarchs Clement and Peter.

Podoben: “Today You have shown forth...” / Unshakeable and godlike towers of the Church, / truly inspired and mighty pillars of the Faith, / all-praised Clement and Peter, protect us all by your prayers.