St. Clement the Bishop of Ochrid and Enlightener of the Bulgarians 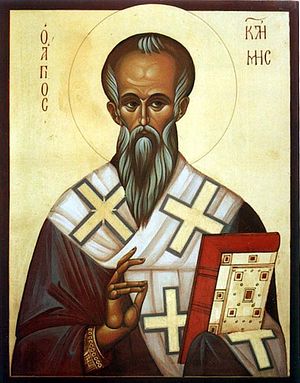 Saints Clement, Bishop of Ochrid, Equal of the Apostles, Naum, Sava, Gorazd and Angelar were Slavs, disciples of Saints Cyril and Methodius (May 11). At first they lived as ascetics in Moravia, where Saint Gorazd succeded Saint Methodius as bishop. He was fluent in Slavonic, Greek and Latin. Saints Clement, Naum, Angelar and Sava were priests.

The Enlighteners of the Slavs were opposed by German missionaries, who had the support of the Pope and the patronage of the Moravian prince Svyatopolk. The struggle centered around the questions of the need for divine services in Slavonic, the Filioque and Saturday fasting. Pope Stephen VI prohibited the use of Slavonic in church.

The proponents of the three-tongued heresy (who wanted to use only Hebrew, Greek, or Latin for Church purposes), after setting aside the ancestral language of the Slavic peoples, brought the disciples of Saint Methodius to trial, including Saint Clement. They subjected them to fierce torture: dragging them through thorns, and holding them in prison for a long time, just as they had done with their spiritual Father, Saint Methodius.

In 886, some of the prisoners were sold to slave-traders, and ended up in the Venice marketplace. The ambassador of the Byzantine Emperor Basil the Macedonian went to Venice, ransomed the saints and brought them to Constantinople. The older confessors were banished. It is not known where Saint Gorazd went, nor where Saint Sava found shelter. Naum and Angelar went to Bulgaria.

In 907 Moravia collapsed under the onslaught of the Magyars, and Moravian refugees escaped along those same paths followed earlier by the saints they had exiled.

The Bulgarians received the Slavonic confessors with respect and requested them to conduct divine services in the Slavonic language. The Bulgarian prince Boris sought out such people as the disciples of Saint Methodius, who labored for the enlightenment of his nation. The saints immediately began to study Slavonic books collected by the Bulgarian nobles.

Saint Angelar soon died, and Saint Clement received the appointment to teach at Kutmichivitsa, a region in southwest Macedonia. In the Eastern Church a worthy man was chosen to be a teacher, someone known for his pious life, and possessed with a gift of words. Saint Clement was a teacher while he was still in Moravia. In Bulgaria, Saint Clement worked as an instructor until 893. He organized a school at the princely court, which attained high esteem during the reign of Simeon. In southwest Macedonia he created separate schools for adults and for children.

Saint Clement instructed the children in reading and in writing. The total number of his students was enormous. Those chosen and accepted for the clergy amounted to 3500 men. In the year 893, Saint Clement became Bishop of Dremvitsa, or Velitsa, and Saint Naum took his place.

Saint Clement was the first Bulgarian hierarch to serve, preach and write in the Slavonic language. To this end he systematically prepared clergy from among the Slavic people. The holy bishop labored for the glory of God into his old age. When his strength failed, and he was unable to fulfill his responsibilities in the cathedral, he asked Tsar Simeon to let him retire.

The Tsar urged the saint not to forsake the cathedral, and Saint Clement agreed to continue his episcopal service. After this he went to Ochrid, to a monastery he founded. There the saint continued with his translation activities and translated important parts of the PENTEKOSTARION.

Soon the saint became seriously ill and departed to the Lord in the year 916. The saint’s body was placed in a coffin he made with his own hands, and was buried in Ochrid’s Saint Panteleimon monastery.

Saint Clement is considered the first Slavonic author. He not only continued the translation work begun by Saints Cyril and Methodius, but also left behind works of his own composition, the first samples of Slavonic spiritual literature.

Many of the lessons and sermons of Saint Clement were brought to Russia, where they were read and lovingly copied by pious Russian Christians.