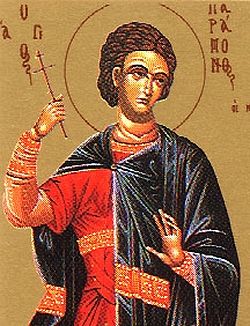 The Holy Martyr Paramon and the 370 Martyrs with him suffered for their faith in Christ in the year 250 during the rule of the emperor Decius (249-251). The governor of the Eastern regions, Aquianus, had locked up 370 Christians in prison, urging them to abjure Christ and instead offer sacrifice to idols.

They subjected the captives to beatings, hoping by torture and the threat of death to persuade them to renounce Christ and worship the pagan gods. One of the local inhabitants, Paramon by name, openly denounced the cruel governor and confessed his faith in the One True God, the Lord Jesus Christ. They beheaded Saint Paramon after fierce tortures, together with the other 370 martyrs.

Your holy martyrs Paramon and Philoumenus and those with them, O Lord, / through their sufferings have received incorruptible crowns from You, our God. / For having Your strength, they laid low their adversaries, / and shattered the powerless boldness of demons. / Through their intercessions, save our souls!

Urged on by the commandments of God, / with patience, you cleansed your souls from all defilement. / You reached perfection as spiritual athletes; / you renounced sacrifice to idols. / Imitating Christ, you were slain with a spear, / most blessed Paramon and Philoumenus. / Always fervently intercede with Christ on behalf of the world.